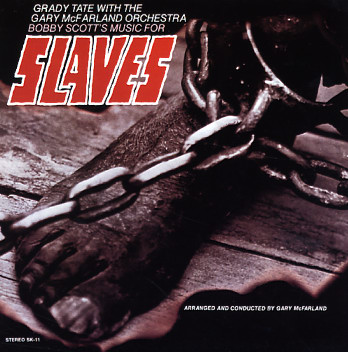 An unusual little soundtrack to this obscure pre-Roots film about slavery – handled with some very nice touches from Gary McFarland, Bobby Scott, and Grady Tate! The music is penned by Scott, and is mostly in that hip blend of jazz and soul roots that he was using on some of his own 60s vocal work – but expanded a bit more here with the groovier styles of Skye Records, thanks to arrangements and conducting from Gary McFarland! The work's not as funky as you might expect, but is still plenty darn great – and there's a few instrumental numbers that are especially great here. Grady Tate sings on the vocal ones, often in the deep-voiced style of his own Skye albums – but with an approach that's a bit more down home and soul-based, which is a nice change – almost like Oscar Brown Jr at the best moments. A number of tracks are done in both instrumental and vocal versions – and titles include "Nightwind", "Slaves", "Black Lullabye", "Another Mornin", and "Pickin Cotton".  © 1996-2021, Dusty Groove, Inc.
(Gatefold cover version – just like the original album!)