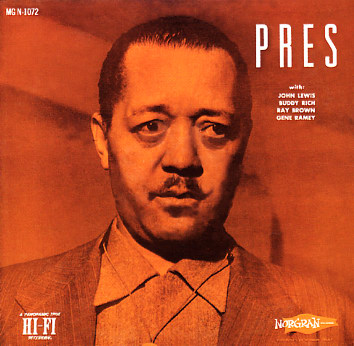 As beautiful an illustration of the genius of Lester Young as you could ever hope to find – tight, short small group numbers recorded with a keen focus on Young's amazing tone – all served up with beautiful sound throughout! The cover bills the set as being by Young and his orchestra, but the material's presented in a variety of different small group settings – with Verve regulars who include Ray Brown on bass, Hank Jones or John Lewis on piano, and Buddy Rich or Joe Jones on drums. There's no other horns on the date, so Lester's tenor is right out front on all numbers – and titles include "Little Pee Blues", "Neenah", "Thou Swell", "Up N Adam", "Encore", and "Frenesi".  © 1996-2022, Dusty Groove, Inc.
(Black label Verve Records Inc pressing, with trumpter logo and deep groove. Cover has a small bit of splitting on the top seam, but is nice overall.)