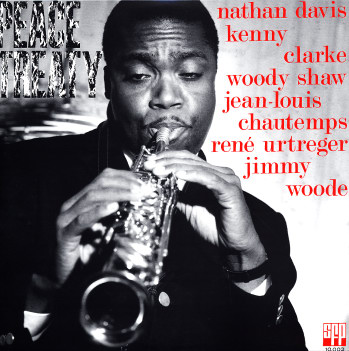 One of the first true moments of genius from saxophonist Nathan Davis – a mid 60s European session cut for the tiny SFP label – and a record that's even rarer than his early classics for MPS! The sound here is similar to the MPS sides – a mixture of soul jazz and modal jazz – served up with a bit more freedoms than Davis might have gotten on the US scene, and featuring a lineup that includes Woody Shaw on trumpet, Jean-Louis Chautemps on baritone sax, Rene Urtreger on piano, Jimmy Woode on bass, and Kenny Clarke on drums. The tight rhythm of Woode and Clarke is a nice counterpoint to the modernism of Davis and Shaw – Davis works a bit on soprano, which sounds especially great! Titles include "Peace Treaty", "Klook's Theme", "Now Let M' Tell Ya", "Kansas City Special", and "Sconsolato". CD features 2 bonus tracks – "Sconsolato (quintet)" and "Kansas City Special (quintet)" – both recorded by an smaller group with Jimmy Gourley on guitar, and without the trumpet and baritone sax.  © 1996-2021, Dusty Groove, Inc.