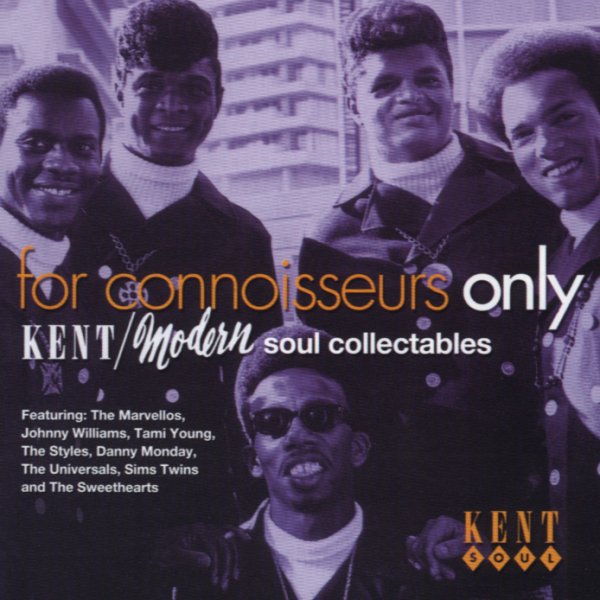 For Connoisseurs Only – Kent/Modern Soul Collectables

A sweet little dip into the catalog of the LA-based Kent/Modern label – the legendary imprint that started in the R&B years, and stayed strong in the soul generation – providing inspiration and a name for the Kent branch of UK-based Ace records, home to some of the best reissues in the Dusty Groove catalog! And while Kent issued some great material back in the day, they also recorded a fair bit of work that never hit the pressing plants – some of which is on this collection, which mixes unreleased numbers with rare singles from back in the day! The set features 28 sublime numbers – a mixture of sweet soul, hard soul, group harmony, and a bit of funk – rare tunes all of them, most never issued on any full length albums. Titles include "I Got Love" by The Other Brothers, "I've Got To Win Your Love For Me" by The Sims Twins, "Baby You're Alive" by The Styles, "The Hunch" by Gene Taylor, "Come Back Baby" by Tami Young, "I'm Gonna Be Sweeter" by Clay Hammond, "You've Got It" by Johnny Williams, "Gimme Some Of Your Lovin" by Arthur Adams, "I Dig It The Most" by Jackie Day, "Down In The City" by The Marvellos, "Make A Little Love" by Lowell Fulsom, "New Lease On Life" by The Universals, "The Sun Don't Shine Every Day" by The Saints, and "That's A Rockin Good Way" by Vernon & Jewel.  © 1996-2023, Dusty Groove, Inc.