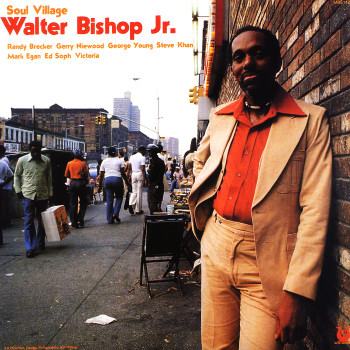 One of a rare few electric albums from the great Walter Bishop Jr – a pianist who started during the bop years, but really grew into new modes in the 70s! The set's an album on Muse, but one with the same hip grooves as Walter Bishop's pair of excellent albums for the Black Jazz label – and like those gems, this set features Bishop working on Fender Rhodes – hitting a groove we never would have expected in the old days, and really going for a style that's at the hippest end of the soul jazz spectrum of the 70s! Tunes are a mix of funky fusion and modal, spiritual styles – and other players include Randy Brecker on trumpet, Gerry Niewood on tenor and flute, and George Young on soprano and alto sax – and the horns are all arranged tightly by Mitch Farber, in a way that adds an extra edge to the record, but still leaves plenty of space for Bishop's solo flights on the keys. Titles include great versions of "Soul Village", "Coral Keys", and "Soul Turnaround" – plus the cuts "Philadelphia Bright", "Sweet Rosa", and "Valerie".  © 1996-2021, Dusty Groove, Inc.