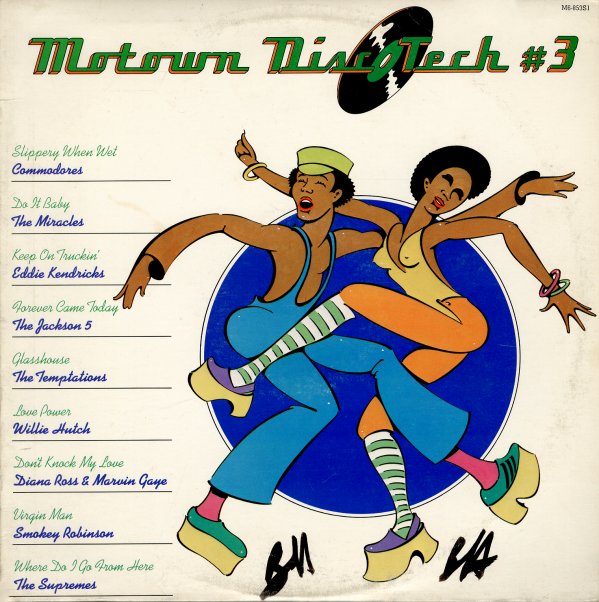 Third volume in this series of collections of Motown material pulled together in the mid 70s featuring some their finest tracks with a heavy dancefloor vibe. Not exactly disco, but solid all the way through, with 9 numbers in all, including "Slippery When Wet" by the Commodores, "Don't Knock My Love" by Diana Ross & Marvin Gaye, "Keep On Truckin'" by Eddie Kendricks, "Forever Came Today" by the Jackson 5, "Glasshouse" by the Temptations, "Love Power" by Willie Hutch, "Where Do I Go From Here" by the Supremes, "Virgin Man" by Smokey Robinson, and "Do It Baby" by the Miracles.  © 1996-2021, Dusty Groove, Inc.
(Cover has ring and edge wear with a sticker in the top right, staining and some seam splitting.)

Nightshift
Motown, 1985. Near Mint-
LP...$4.99
By this point in their career, The Commodores have lost Lionel Richie and any sort of funk credibility they had from their early years – but they also somehow manage to reemerge with a great new talent for a sweet mellow groove! The title tune "Nightshift" was one of those tracks ... LP, Vinyl record album

Two To One
Motown, 1978. Near Mint-
LP...$2.99
Features arrangements by Willie Hutch, Van McCoy, and Terry Woodford. Titles include "Find A Way", "We Owe It To Ourselves", "Never Gonna Get Enough", "If It Would End", "Chicago Send Her Home", and "Don't Pity Me". LP, Vinyl record album