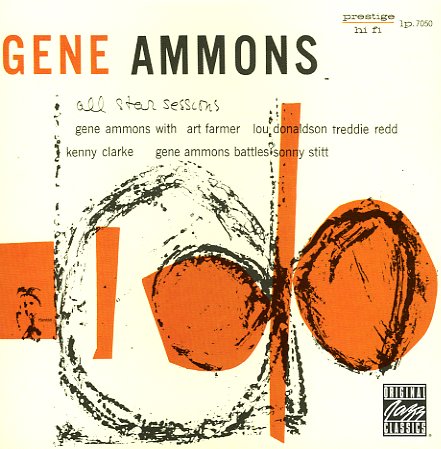 A classic album from Gene Ammons – one that features the tenor legend at his prime, working in two different settings! The first batch has Ammons "battling" Sonny Stitt in a set of stuff that features hard twin tenors in the frontline, with the kind of cutting contests the two of them would perform live all over the country. Titles on that one include "Stringin The Jug", "New Blues Up & Down", and "You Can Depend On Me". The other side of the record features Ammons in one of those great Prestige open-ended groups – with crack players like Art Farmer, Lou Donaldson, and Freddie Redd – all soloing long and soulfully on two tracks – "Woofin & Tweetin" and "Juggernaut".  © 1996-2021, Dusty Groove, Inc.
(OJC pressing. Cover has a lightly stained and wavy corner.)