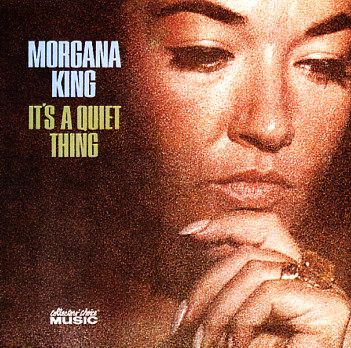 Also available
Morgana King — It's A Quiet Thing ... CD 11.99
A rich effort from Morgana King – the first of her rare Reprise LPs – and a record that shows incredible range and an ability to bring a heavy, textural mood to just about any kind of tune! Torrie Zito's arrangements on It's A Quiet Thing are lush, but, well, quietly so – and Morgana's vocals can build from what's kind of a deep vibrato hush to a really soaring affect! It's nice stuff – with an approach to well known songs of the time that's quite unique! Titles include "It's A Quiet Thing", "Dindi", "Gone With The Wind", "Little Blue Girl", "Mountain High, Valley Low", "How Insensitive", "Here's That Rainy Day", "Deep Song" and "If You Should Leave Me".  © 1996-2022, Dusty Groove, Inc.
(Tri-color stereo pressing. Cover has light wear.)

Nancy & Lee
Reprise, Late 60s. Very Good-
LP...$19.99 (LP...$23.99, CD...$13.99)
One of the weirdest, wildest pop albums of the 60s – maybe the crowning achievement of both Nancy Sinatra and Lee Hazlewood – two artists who'd worked together before, but never with an intensity this great! The record is overflowing with all the great touches you'd expect from Lee ... LP, Vinyl record album

September Of My Years
Reprise, 1965. Very Good
LP...$9.99
A wonderfully mature album from Frank Sinatra – a set that has him coming to terms with his time in life, and expressing things with a beautiful quality that almost sets a whole new standard for his work! And in a way, the aesthetic here is almost that which would be picked up by a host of ... LP, Vinyl record album