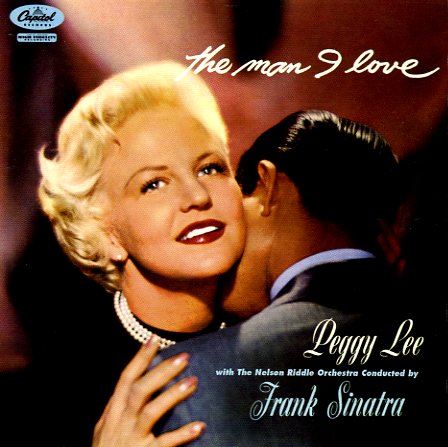 Quite a rare album from Peggy Lee – and a strange one too! The album features backings "conducted" by Frank Sinatra, done in a moody, flowing, dreamy and sad style – similar to his own work of the late 50s Capitol years, especially the more melancholy albums that we love so much. Frank's probably not doing the bulk of the work, though, as the record also credits Nelson Riddle with arrangements – and Riddle's sound here is very strong, again in the mood of his best sad work with Sinatra – territory explored on albums like Wee Small Hours or Only The Lonely. Titles include "That's All", "Please Be Kind", "He's My Guy", "Then I'll Be Tired Of You", "The Folks Who Live On The Hill", and "If I Should Lose You".  © 1996-2022, Dusty Groove, Inc.
(Mono turquoise label pressing. Cover has some wear and aging, writing in pen on front, and a small name in pen on back.)

In The Name Of Love
Capitol, Early 60s. Near Mint-
LP...$5.99
Music direction by Lou Levy – which is quite a surprise – with arrangements by Dave Grusin, Lalo Schifrin, and Billy May – on some unusual tracks that include "My Sin", "The Boy From Ipanema", "Talk To Me Baby", "The Right To Love", "The ... LP, Vinyl record album

Natural Woman
Capitol, Late 60s. Near Mint-
LP...$6.99
A key album in the transformation of Peggy Lee's sound at the end of the 60s – one that has her moving from just being a jazz singer, into a more complicated role of interpreting contemporary singer/songwriter material – often with a mature and experienced tone, one that makes her ... LP, Vinyl record album