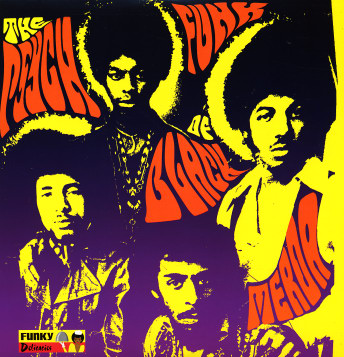 A collection of ultra-rare material from the mighty Black Merda and affiliates – the legendary funk group who mixed in plenty of Hendrix-styled guitar to their grooves – resulting in sound that few other groups can touch! The "Psych Funk" title is very well put – given the mix of heavy guitar, funky bass, and pounding drums – and the vocals are nice and soulful throughout – especially on the few tracks sung by Linnie Walker – although some moments have more trippy, psych-styled phrasing – a bit like early Funkadelic! The set mixes together unissued tracks with alternates of versions on the other Funky Delicacies collection – and titles include alternate versions of the Black Merda tunes "Cynthy-Ruth" and "Reality"; the tracks "People Let Me Know" and "Darn Well", with vocals by Linnie Walker; The Soul Agents' excellent funk version of "Foxy Lady"; and the VCL Veasey tracks "Do Nothing Wrong" and "Original Man".  © 1996-2022, Dusty Groove, Inc.