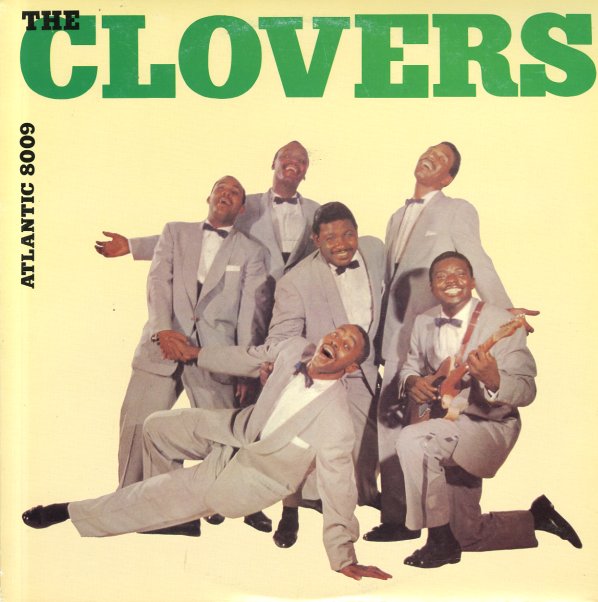 Seminal Atlantic Records work from The Clovers – one of those groups who were already great on their own, but then really took off once they hit the label! There's a rawness to these sides that rivals the early Drifters at their best – the Clyde McPhatter years of that group – with vocal interplay that virtually invents the group harmony sound for years to come, mixed with raw rhythms that often feature lots of The Clovers' trademark guitar from Bill Harris! Easily one of the top 10 group soul albums of the 50s – with tracks that include "Love Love Love", "I Played The Fool", "Devil Or Angel", "Little Mama", "Crawlin", "Here Goes A Fool", "Lovey Dovey, "Yes It's You", "Ting A Ling", and "Hey Miss Fanny".  © 1996-2023, Dusty Groove, Inc.
(Mono black label pressing with deep groove. NOTE – Vinyl has a surface crack at the beginning of "Ting-A-Ling" that plays with a faint click, nothing too bad really, and is VG- otherwise. Cover has light wear, aging, and some surface blemishes.)

This Is Your Time
RFC/Atlantic, 1983. Very Good+
LP...$2.99
An overlooked set from Change – a record that possibly wasn't as hit-worthy as some of their previous efforts – yet one that still had the group very much at the top of their game! By this point, Change had really evolved past being just a studio project, into a rock-solid soul group ... LP, Vinyl record album

Roberta Flack & Donny Hathaway
Atlantic, 1972. Very Good+ Gatefold
LP...$13.99
An amazing record from the team of Flack & Hathaway – one of the hippest duos in soul! Individually, each had taken the music to new heights and new audiences, through the use of jazzy phrasing and sophisticated lyrics, while never selling out in the way that earlier pop soul acts had ... LP, Vinyl record album

Atlantic Rhythm & Blues – Vol 3 – 1955 to 1958
Atlantic, Mid 50s. Near Mint- 2LP Gatefold
LP...$9.99
Culled from the rich history of the Atlantic records label, and lovingly put together with great notes and everything! 28 tracks in all, including "Ruby Baby" and "Fools Fall In Love" by the Drifters,"In paradise" by the Cookies, "The Chicken & The Hawk" ... LP, Vinyl record album

Exciting Wilson Pickett
Atlantic, 1966. Very Good
LP...$24.99
Always exciting work from the Wicked Pickett – a set that's filled with sharp-edged soul tracks throughout – and which perfectly shows why Wilson was a key link between funk and soul back in the 60s! The album was recorded at the two great hubs of southern soul production in the 60s ... LP, Vinyl record album

Perfect Angel
Epic, 1974. Very Good+
LP...$24.99
Minnie Riperton's first album for Epic – and the record that broke her from a hip Chicago underground artist into one of the seventies' biggest female soul stars! The record moves past the baroque soul of Minnie's early years with Rotary Connection and Charles Stepney – and hits a mix ... LP, Vinyl record album

Standing Ovation
SOUL, 1971. Very Good+
LP...$4.99
Almost a deeper soul sound than before from Gladys Knight – a record that features some very strong southern-styled production from Johnny Bristol and Clay McMurray – but in a way that reflects the new sort of "adult" mode of the time! The style here is a careful blend of the ... LP, Vinyl record album