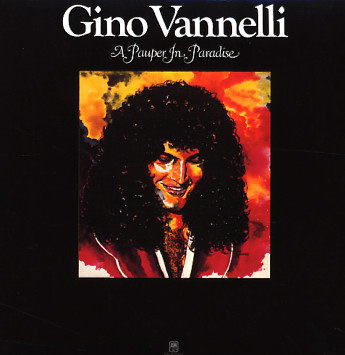 By this point in his career, Gino Vannelli was hardly a Pauper In Paradise – and with the perm in his hair, and shaggy rug on his chest, he was every bit the wealthy 70s modern man in his looks! But despite that mismatch, the album's a great one – mainstream pop with a surprising degree of soul – a blend that few others could hit this well and still retain a bit of credibility, but Gino seems to make it all work out quite well. Side one features some shorter hook-heavy tracks arranged by Gino and brother Joe – and side two features a longer suite done with Don Sebesky leading the Royal Philharmonic Orchestra – one that really soars with some great Sebesky touches at times! Titles include "Black & Blue", "A Song & Dance", "Mardi Gras", "Valleys Of Valhalla", "The Surest Things Can Change", and "One Night With You".  © 1996-2021, Dusty Groove, Inc.
(Includes the printed inner sleeve. Cover has light wear.)