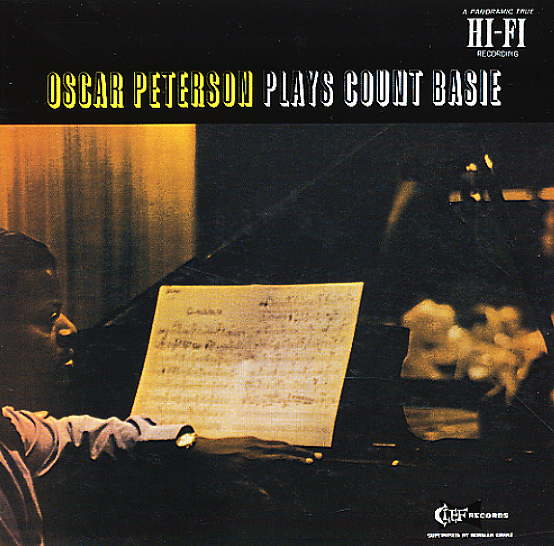 Count Basie taken down a few notches – not in quality, but in terms of the size of the group – as Oscar really opens up some of the Count's standards in a whole new way, by playing them with a stripped-down quartet that features Herb Ellis on guitar, Ray Brown on bass, and Buddy Rich on drums. Given that Rich is working with the Peterson trio, their sound has a bit more bottom than on some other Verve sides from the time – grooving things nicely in a true Basie way, on a set of tunes that includes "Blues For Basie", "Broadway", "Topsy", "One O'Clock Jump", and "Jive At Five".  © 1996-2022, Dusty Groove, Inc.
(Mono MGM pressing. Cover has some wear and a mostly split top seam.)

We Get Requests
Verve, 1964. Very Good
LP...$18.99 (LP...$36.99)
A key example of the popularity of the Oscar Peterson Trio in the mid 60s – an album of tracks that listeners wanted to hear done in the group's familiar style – that wonderful way of soulful inflection that Oscar had when he shifted up the lineup of the trio at the start of the 60s! ... LP, Vinyl record album

Sound Of The Trio
Verve, 1961. Near Mint-
LP...$14.99 19.99
The sound of the trio is loud and clear on this set – captured before a very appreciative crowd at the London House in Chicago, and featuring Peterson at his inventive best! The tracks on the set stretch out longer than most of the group's studio sessions from the time, and the album's ... LP, Vinyl record album

Oscar Peterson Plays The Cole Porter Song Book
Verve, 1959. Near Mint-
LP...$14.99 19.99 (CD...$2.99)
Cole Porter's tunes are great enough on their own, but Oscar really opens them up on this set – picking up the inherent rhythms in the numbers and really working them over – in a way that makes the outing one of the most lively in Peterson's songbook series for Verve! Oscar's fluid ... LP, Vinyl record album