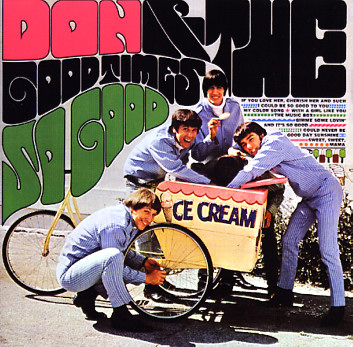 Sweet sweet pop from the Seattle scene of the 60s – the classic Epic album by a group led by keyboardist/producer Don Gallucci – a combo with a sound that's a lot warmer than most of their Northwest contemporaries! Although Gallucci had roots in the Kingsmen, the style here is much more in a southern California mode – Sunshine-influenced and filled with great harmonies on the vocals, even on tracks that are driven by a slightly more garage undercurrent in the instrumentation. Part of the strength of the set is most likely due to Stu Phillips and Jack Nitzsche – who handled the arrangements alongside Nitzsche's beautifully spacious production – and although an obscure one, the record easily stands with some of the greatest jangle pop by bigger names of the 60s! Titles include "I Could Be So Good To You", "The Music Box", "I Could Never Be", "Sweet Sweet Mama", "Good Day Sunshine", and "With A Girl Like You".  © 1996-2021, Dusty Groove, Inc.
(White label mono promo. Cover has a number in marker at the top left corner in front and discoloration from age in back.)