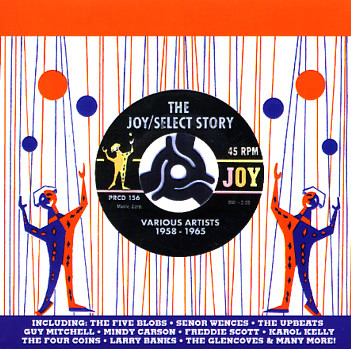 A wealth of great pop, rock, soul, and novelty numbers from the end of the 50s and the start of the 60s – unusual little tunes recorded for the Joy and Select record labels, most of which we've never heard before! There's a rich sense of discovery in this collection – not just because the music is unfamiliar, but also because the way it's put together is so darn great – kind of like finding an unusual specialty show at the left end of the dial in the middle of the night – the sort that always turns you onto new records you'd never hear otherwise! Our favorite numbers here are probably the novelty numbers – but there's also some great straighter tunes that lived in the shadows of the hits, and which offer up a slightly different spin on early 60s pop. Titles include "From The Top Of Your Guggle" by The Five Blobs, "Sock Hop" by The Gorman Sisters, "When I Fall In Love" by Mindy Carson, "Robot Man" by Jamie Horton, "Bossa Nova Stomp" by The Fabulous Dials, "Slow Dance" by Karol Kelly, "S All Right S All Right" by Senor Wences, "Hootenanny" by The Glencoves, "The Soul Of My Man" by Pat Jarvis, and "When The Wind Changes" by Freddie Scott. 26 tracks in all!  © 1996-2021, Dusty Groove, Inc.