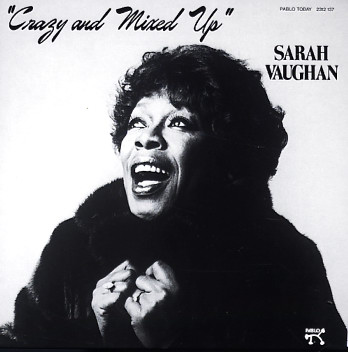 Nothing crazy and mixed up here, but a wonderful later date from Sarah Vaughan – one that's recorded with subtly sophisticated brilliance! The setting is easygoing and relaxed – far more so than most of Vaughan's records from many years past – and backing is provided by Roland Hanna on piano, Joe Pass on guitar, Andy Simpkins on bass, and Harold Jones on drums – all grooving in a warmly rounded mode that seems to further the already-great sound of Sarah's vocals at this point in her career. The record's one you might pass by because of the date, but it's easily one of the greatest Vaughan albums from later years – and tracks include "I Didn't Know What Time It Was", "That's All", "Seasons", "Love Dance", "The Island", "In Love In Vain", and "Autumn Leaves".  © 1996-2022, Dusty Groove, Inc.
(Japanese pressing, 28MJ 3202, including insert.)