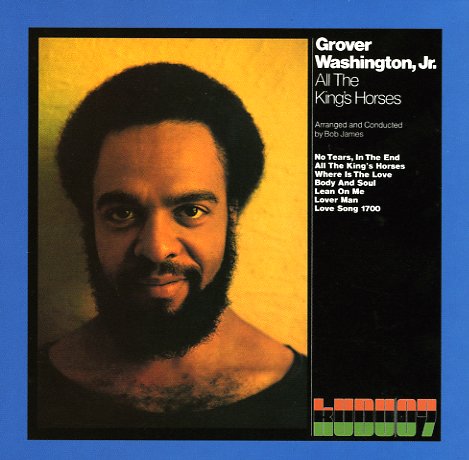 One of Grover Washington's first albums as a leader – cut hot on the heels of some great work as a sideman, including some key funky dates with Charles Earland on Prestige! The sound here is a bit looser than some of Groover's smoother sides to come – a nice blend of his earthy jazz funk roots with the warmer sounds of the CTI/Kudu world – arranged and produced beautifully by keyboardist Bob James, who also plays both electric piano and harpsichord on the album! The cuts are a bit shorter than later on, but still totally tremendous – a sly, subtle approach to jazz funk that really took the keyboard/tenor mode into bold new territory for the 70s – a real genre-starting record that still sounds sublime all these many years later. Grover plays tenor and alto – no soprano sax yet – and other players include Richard Tee on organ, Billy Cobham or Bernard Purdie on drums, and Eric Gale or Cornell Dupree on guitar. Titles include "All The King's Horses", "Body & Soul", "Lean On Me", "Lover Man", "Love Song 1700", and "No Tears In The End".  © 1996-2021, Dusty Groove, Inc.

Live At The Bijou
Kudu, 1977. Very Good+ 2LP Gatefold
LP...$6.99 (CD...$14.99)
A totally great Grover Washington record – and with 25 years behind us, we really now realize how fantastic all the early Kudu sessions really were! The record was recorded live at the Bijou, and is spread out over 2 long LPs, with lots of room for tasty open-ended solos by Grover and the ... LP, Vinyl record album