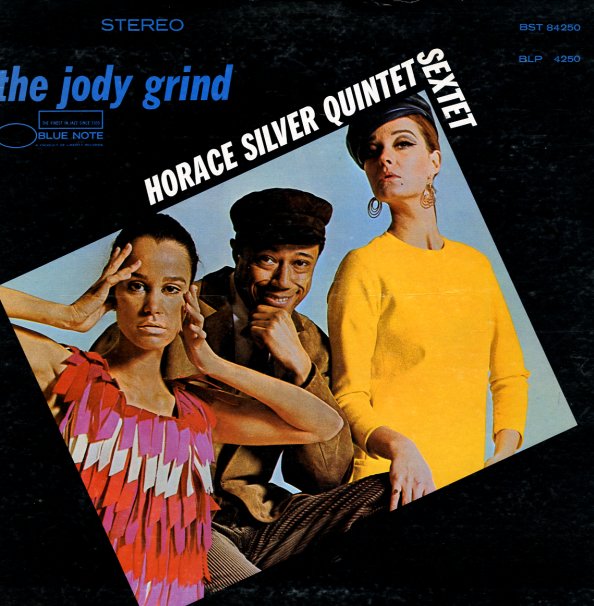 Also available
Horace Silver — Jody Grind ... CD 14.99
A fantastic turning point for the great Horace Silver – a set that's still got the soul jazz groove of some of his earlier 60s hits – but which also has the pianist really making magic with some of the younger players on the scene – in a lineup that features the young Woody Shaw on trumpet, James Spaulding on alto and flute, and Tyrone Washington on tenor sax! As with Hank Mobley and Lee Morgan at the time, there's an openness to some of Silver's writing and arranging here that's really great – as if he's absorbing some of the qualities of the new thing generation, but never going there himself – and instead just finding a way to color his music with really fresh energy and tones. Larry Ridley is on bass and Roger Humphries is on drums – completing a really fantastic lineup – and titles include the title cut "The Jody Grind" – is an enduring funky jazz classic – plus "Blue Silver", "Mary Lou", "Mexican Hip Dance", "Grease Piece", and "Dimples".  © 1996-2022, Dusty Groove, Inc.
(Liberty stereo pressing with Van Gelder stamp. Cover has some ringwear, heavy edge wear, and a half split bottom seam.)

Silver 'N Brass
Blue Note, 1975. Very Good+
LP...$24.99
A beautifully soulful set from Horace Silver – hardly the "with brass" session you might guess from the title, and instead a well-integrated album that really showcases a new level of arranging genius from Horace! The set is heavy on hip horns – with work from Oscar Brashear, ... LP, Vinyl record album

In Pursuit Of The 27th Man
Blue Note, 1973. Very Good Gatefold
LP...$24.99 (CD...$11.99)
A real watershed album from Horace Silver – a record that has him stepping strongly into the 70s – but with a rich new groove that's different both from his 60s work, and from the heavy politics of his United States series too! The album has Horace picking up a slightly electric sound, ... LP, Vinyl record album

Sterling Silver
Blue Note, 1958/1979. Near Mint-
LP...$16.99
Excellent 70's issue of a number of tracks recorded by Horace Silver in the late 50's – including some (then) unissued material, and alternate versions of popular tracks, recorded with different bands than on the hit. Highlights include a vocal version of "Senor Blues" (with Bill ... LP, Vinyl record album

Song For My Father
Blue Note, 1963. Very Good
LP...$149.99 (CD...$4.99, CD...$7.99)
An incredible record – the kind of album that only Blue Note could put out, and an instant classic that will sound wonderful forever! The album's truly one of the great ones – one of those Blue Notes that still makes you stop and pause when you hear it, even though you've heard it a ... LP, Vinyl record album