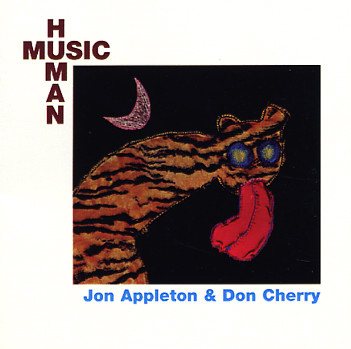 A fantastic record – and a really mindblowing mix of spiritual jazz and electronics! The set is an amazing collaboration between trumpeter Don Cherry and pioneering electronic musician Jon Appleton – one of those rare meetings of the minds that goes far deeper than you'd expect! On the set, Cherry's trumpet, flute, and percussion is heavily processed by Appleton – often in ways that are organic enough to keep with Cherry's other experiments of the time, and with the "Human Music" title of the set – but sometimes with the more playful feel of Appleton's other music from the time. The mix of electronics and improvisation is amazing – years ahead of its time, and with a haunting sound that works perfectly against Cherry's style of restrained spiritualism. The LP's got 4 long tracks – "Boa", "Oba", "Abo", and "Bao" – all recorded live in the studio! CD also features 2 bonus tracks – "Don" and "Jon".  © 1996-2021, Dusty Groove, Inc.