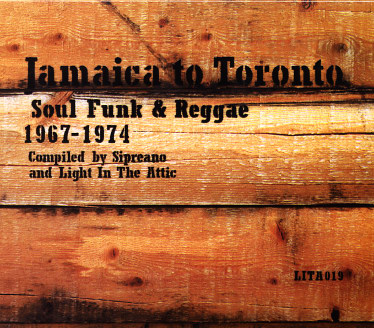 A mindblowing musical discovery – funky music made in Canada by ex-patriot Jamaicans – easily some of the most obscure post-colonial grooves we've ever dug! The sound here is a lot less reggae-based than you'd expect – as most of the tunes are in a really nitty gritty funky 45 sort of mode – filled with strong influences from American soul of the late 60s and early 70s, but often done with a style that's a bit dirtier and fuzzier, especially at the bottom of the rhythms. There's a few traces of Jamaican production styles on the records, but overall the album's more like finding a lost stash of rare 45s from some smaller American funk scene – all work that's totally darn fresh, and beautifully presented here in a lavish booklet filled with enough notes and vintage images to rival the work coming out of the Numero camp of late! Great stuff all around, with titles that include "Chips Chicken Banana Split" and "Fugitive Song" by Jo Jo & The Fugitives, "Eternal Love" by The Sheiks, "Memories" by Noel Ellis, "Right On" and "I Wish It Would Rain" by The Cougars, "Grand Funk" by Jackie Mittoo, "Love Is The Answer" by Ram, "You're So Good To Me Baby" by Eddie Spencer, "Mr Fortune" by The Hitch-Hikers with Mighty Pope, "Fire (She Need Water)" by Wayne McGhie & The Sounds Of Joy, and "I Believe In Music" by Bob & Wisdom.  © 1996-2021, Dusty Groove, Inc.