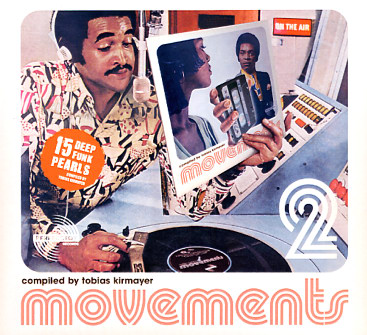 A second turn in the Movements series on the Perfect Toy label – some of the most blazingly funky 45s you'll hear – put together by the Tobias Kirmayer of Tramp Records! Once again we're floored by how great all of this stuff sounds – some of the deepest, tightest funk material we've ever heard – with snapping drums, perfectly timed horn blasts – and some hard psychedelic soul touches of organ and wailing vocals – while never falling short of unfailingly funky! 15 great tracks: "If It Feels Good" by Phil Flowers, "There's A Wrinkle In Our Time" by 1984, "Don't Chain My Soul" by Carlton Basco, "My Mind Set Me Free Pt 1" by House Guests, "Now Is The Time" by Sisters Love, "Southern Fried Chicken Pts 1 & 2" by Bill Thomas & The Fendells, "Warm Daddy's Choice" by River Front Band, "Bring Out Yourself" by Emperors Soul 69, "Bahama Soul Stew" by Funky Nassau, "Motherless Child" by Harmonica Paul, "Arabian Funk" by Ray Anthony and more!  © 1996-2021, Dusty Groove, Inc.