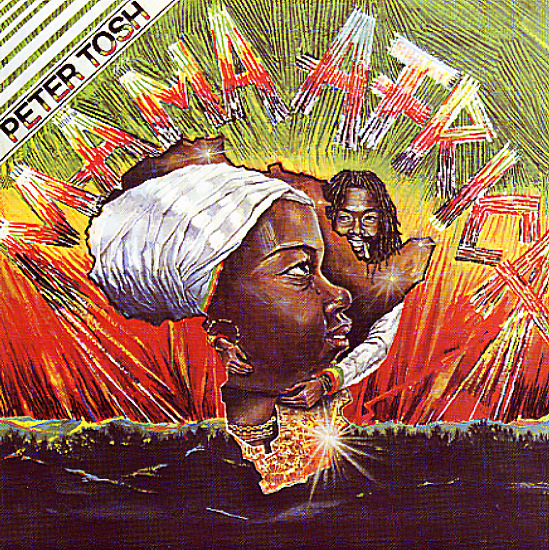 One of the most righteous albums ever recorded by Peter Tosh – as you might guess from the title and cover! Tosh could be great on other themes – but this set has him picking up even more politics than usual – maybe a bit late in the roots game, but able to find a way to bring the message to a much larger audience – almost as if he's taking the helm from the recently late Bob Marley, his former partner in The Wailers! Sly and Robbie are on board for rhythms, and production is in the best mainstream reggae mode of the time – on titles that include "Mama Africa", "Glasshouse", "Maga Dog", "Where You Gonna Run", "Peace Treaty", and a surprisingly strong version of "Johnny B Goode".  © 1996-2022, Dusty Groove, Inc.
(Original US pressing, with inner sleeve!)

Bush Doctor (Rolling Stones)
Rolling Stones, 1978. Near Mint-
LP...$19.99
A big crossover moment for Peter Tosh – a set that was issued on the Rolling Stones own label, with a bit of help from Keith and Mick themselves! But if that makes you worry about some clunky effort that tries to blend rock and reggae, you can put all your fears aside – as the set's ... LP, Vinyl record album

Journey To Addis
Island, 1978. Near Mint-
LP...$14.99
It may be commercial reggae, but the strength of the group's version of "Now That We Found Love" really pushed them over the top! That track's the real winner here – a smooth modern soul number with just a slight hint of Kingston, grooving away in a crossover style that we still ... LP, Vinyl record album