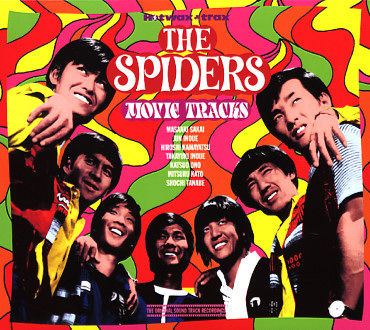 Mod mod grooves from this ultra-hip Japanese combo of the 60s – a garagey group who burn with real intensity in this selection of obscure soundtrack material! The Spiders may not have reached big fame on this side of the Pacific, but back in the late 60s they were clearly the stuff of cinematic action in Japan – as you'll hear on this great collection of soundtrack rock bits from 1967 and 1968! The 21 track package presents the group in all its fuzzed-up brilliance – a hard-edged blend of Hammond organ, tripped out guitar, and pounding drums – often topped with catchy sing-song lyrics that are still plenty compelling, even if you don't understand Japanese! There's a sound here that's somewhere between early Zombies material and some of the garagier side of the Sunset Strip underground – but plenty of moments are very much of their own mind as well, thanks to inventive production and a very playful approach to the tunes. Titles and notes are all in Japanese, but the music is more than enough to get you started and the CD also features plenty of great images in the booklet.  © 1996-2021, Dusty Groove, Inc.