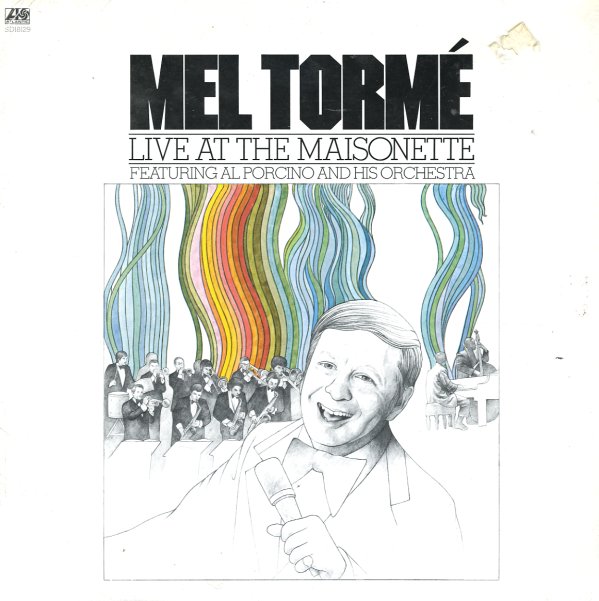 Live At The Maisonette

Great live work from a near-lost stretch of Mel Torme – a time when he wasn't recording as much as a few years before, but still has a hell of a lot of power in performance! Backings are tight and jazzy – served up by the Al Porcino, with the same punchy approach that Marty Paich gave Mel on other albums – and set to some surprisingly nice arrangements that Torme supposedly handled himself. The recording quality brings a nice sort of liveness to the date – really captures the crowd's enthusiasm in the Maisonette Room of the St Regis – and titles include "Jet Set", "What Are You Doing The Rest Of Your Life", "Route 66", and "It Takes Too Long To Learn To Live Alone" – plus an extended "Gershwin Medley", a hint of Mel's medley years to come – and a surprising take on Stevie Wonder's "Superstition".  © 1996-2021, Dusty Groove, Inc.

Golden Voice Of Mel Torme (aka Songs For Any Taste)
Bethlehem, 1957. Very Good+
LP...$16.99
One of Mel Torme's best albums for Bethlehem Records – a set that's got far more depth and jazz than you'd guess from the title! The record features Mel working with a small group led by Marty Paich, a genius arranger who's still (in our humble opinion) the best person to ever accompany ... LP, Vinyl record album

Time For Us (PAUSA)
Capitol, Late 60s. Near Mint-
LP...$2.99
Very groovy! This is an excellent album of swinging tunes that Mel cut for Capitol – very much in the Now Sound vein of his Right Now album for Columbia, and like that one, a mix of late 60s pop tunes and more obscure numbers, all done in a punchy "in the lounge with" mode. Titles ... LP, Vinyl record album

Live At The Crescendo
Affinity (UK), Mid 50s. Near Mint- 2LP Gatefold
LP...$9.99
Compiled from two live dates in 1956 and 1957 – accompanied by Howard McGhee on trumpet, Ralph Sharon on piano, Max Bennett on bass, and Stan Levey on drums in 1956; and with Don Fagerquist on trumpet, Marty Paich on piano, Larry Bunker on vibes and conga, Max Benett on bass, and Mel Lewis ... LP, Vinyl record album

Ole Torme
Verve, 1959. Very Good-
LP...$6.99
A rare gem from Mel Torme – one of his greatest albums of the 50s! The album's got a very unusual approach – for Mel, that is – in that it sets his vocals up in Latinized arrangements, handled with a brassy finish by the great Billy May. The set's got a heck of a lot more punch ... LP, Vinyl record album

That's All
Columbia, 1966. Near Mint-
LP...$7.99
One of the greatest, straightest sets from Mel Torme – an all-classic batch of tracks that's quite different than his other album for Columbia! Torme checks in as a totally committed, totally serious jazz vocalist here – with an impeccable approach to the music that puts this album ... LP, Vinyl record album

Inside Out
Atlantic, 1967. Very Good+
LP...$9.99
A great little record by Bobby – recorded hot on the heels of his big hit recording of "If I Were A Carpenter", and with a surprising respect for Tim Hardin and a lot of the other young songwriters of the post-folk years. Keep in mind that Darin was really feeling his mortality at ... LP, Vinyl record album

Hello There Universe
Atlantic, 1970. Very Good Gatefold
LP...$5.99 (CD...$6.99)
One of Mose's best albums for Atlantic – an ambitious session that features larger arrangements backing him up, making for a much fuller sound than on other records! The album includes a greatly grooving version of "Wild Man On The Loose" – done with this cool sneaky organ ... LP, Vinyl record album

Brother Where Are You
Atlantic, 1973. Sealed
LP...$14.99
Sweet 70s funk from the great Oscar Brown – quite a change from his jazz-based work of the 60s, but a great new sitting for all of his wonderful wit and warmth! Brown's still a hell of a songwriter, and one with a very socially-conscious eye – sharper here than before, with lots of ... LP, Vinyl record album