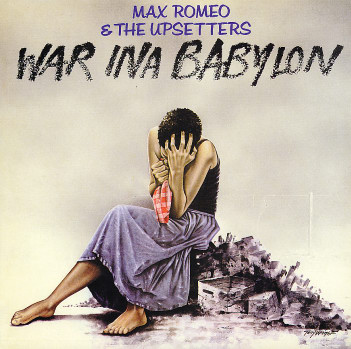 A stone 70s classic in the Island Records catalog – proof that although the label was scoring big with some of their superstar acts, they still had a great ear out for groundbreaking reggae material! The mighty Max Romeo works here with Lee Scratch Perry in the studio – who gives him fantastic support, at a level that opens up really righteous currents in his music – a fantastic blend of the roots reggae spirit of Romeo and the studio genius of Perry! Romeo's soulful inflections matched perfectly to the dark, swampy Black Ark grooves – on titles that include "War Ina Babylon", "Chase The Devil", "Stealin'", "One Step Forward", "Smile Out Of Style", "Uptown Babies", "Tan And See", "Smokey Room", and "Norman".  © 1996-2022, Dusty Groove, Inc.
(White label Upsetter pressing with Miami Tape stamp in a red border cover. Cover has light wear, price sticker remnants, and is bent at the top right corner.)

Everything Is Great
Island, 1979. Near Mint-
LP...$9.99
Smooth soulful reggae, from one of the few groups to successfully span both the commercial and hardcore roots worlds. The last set cut before Jacob Miller's untimely death and his final proper recording with the band, this album works the crisp and clean approach that a great deal of the reggae ... LP, Vinyl record album

Equal Rights
Columbia, 1977. Very Good+
LP...$16.99
Peter Tosh's great, militant, second solo LP, one of the best of his career! Equal Rights is up to par with the finest Wailers LPs, although this is a bit heavier than the groovy, mellow Legalize It, the predecessor. A vital, hugely important, essential set of mid-to-late 70s reggae on Columbia. ... LP, Vinyl record album

Sheila Hylton
Harry J, 1979. Near Mint-
LP...$34.99
Produced and arranged by Harry J, with organ from Winston Wright and guitar from Chinna Smith and Willie Lindo – on titles that include "Come Lay Some Loving", "Our Love", "I Think I'm Losing You", "Breakfast In Bed", "Honey I Want Some More", ... LP, Vinyl record album

Forces Of Victory
Mango, 1979. Near Mint-
LP...$39.99
The second album From LKJ, a tough and tight follow up to Dread Beat & Blood, with the poet coming just as hard out the box this time around as the first. Johnson's righteous lyrical indignation, terse delivery, and rhythmic focus dovetail perfectly with tight, fat riddims from a crack band ... LP, Vinyl record album

100% Dynamite NYC – Dancehall Reggae Meets Rap In New York City – Vol 2
Soul Jazz (UK), 1980s/1990s. Near Mint- 2LP
LP...$29.99
The confluence of dynamite dancehall reggae with strains of hip hop – from the Big Apple to Jamaica – blazing material from the compilation kingpins at Soul Jazz UK! 100% Dynamite NYC does a great job of bringing together material from the late 80s and the 90s that bridged the worlds ... LP, Vinyl record album