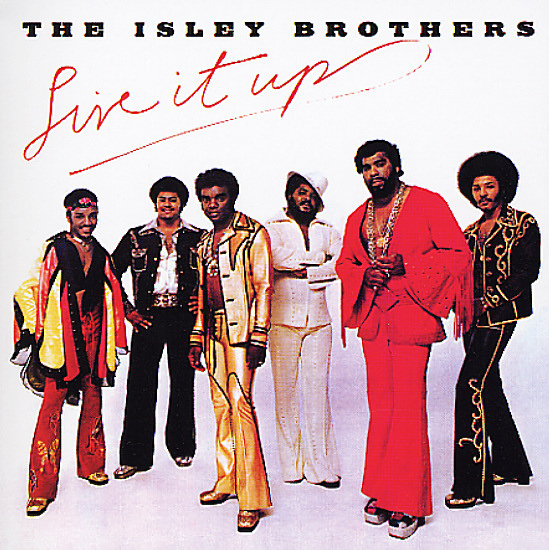 Mid 70s genius from the Isley Brothers – a record that has them firmly hitting their superstar mode with a fantastic blend of mellow soul and guitar-heavy funk! The record's got a sense of class, care, and poise that's head and shoulders above most of the group's contemporaries – an ability to rock out one minute, then slow things down for a beautiful ballad the next – all while maintaining enough credibility to still hold onto older fans, yet also reach out to a much bigger audience in the mainstream. Titles include the sublime "Ain't I Been Good To You (parts 1 & 2)", a long track with a sinister bassline and a dark groove that really makes it great, a great cover of "Hello It's Me" that's even better than the original, and the key mellow cuts "Lover's Eve" and "Brown Eyed Girl" – plus "Live It Up (parts 1 & 2)", "Need A Little Taste Of Love", and "Midnight Sky (parts 1 & 2)".  © 1996-2021, Dusty Groove, Inc.
(Includes the printed inner sleeve. Cover has some staining and wear on the bottom portion.)

Big Maybelle – The Okeh Sessions
Okeh/Columbia, Mid 50s. Near Mint- 2LP Gatefold
LP...$19.99
A bit blues, a bit jazz – and a singer with a style unto her own – the amazing Big Maybelle, one of the greatest artists to record for Okeh Records in the 50s! This well-done collection pulls together every single Maybelle recorded for the R&B powerhouse back in the day – a ... LP, Vinyl record album

This Is Niecy
Columbia, 1976. Very Good-
LP...$4.99
Genius work from Denice Williams – a singer who'd cracked the charts a bit as Denice Chandler, with a little girl soul sound, way back in the 60s – but who's grown up considerably by this essential 70s set! Chandler's voice is still a bit high – almost in a Minnie Riperton sort ... LP, Vinyl record album