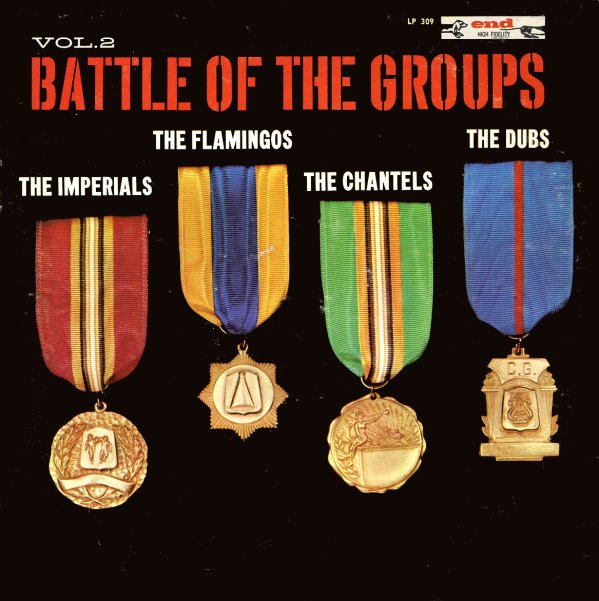 Battle Of The Groups Vol 2

A great collection of vocal group material from George Goldner's End label – home to some of the most perfectly put together doo wop recordings of its time! Titles include "Jump Children" and "That Love Is You" by The Flamingos, "I'm Allright" and "So Near & Yet So Far" by Little Anthony & The Imperials, "Never Let Go" and "I'm Confessin" by The Chantels, and "Don't Ask Me To Be Lonely" by The Dubs.  © 1996-2021, Dusty Groove, Inc.
(Grey label, dog logo pressing, with "division of Roulette". Vinyl is great – and cover is very nice overall, but has some light staining/flaking on the opening end.)

Goin Home For Love
Sunshine Sound, 1979. Very Good+
LP...$11.99
A wicked set of groovers from Jimmy Bo Horne – produced with a snapping KC & The Sunshine Band groove, and proof that the Miami sound could still burn strong at the end of the 70s! The tunes are a mix of mellow numbers and funkier tracks that have a snapping "spank" sort of ... LP, Vinyl record album

Pearl
Columbia, 1971. Very Good+
LP...$19.99
The sound of a legend – a raw rocking classic from Janis Joplin – arguably the most perfectly-formed record from her all-too-short run in modern music! There's a focus here that's even sharper than before – and a rising of the funky undercurrents that Janis always had in her ... LP, Vinyl record album