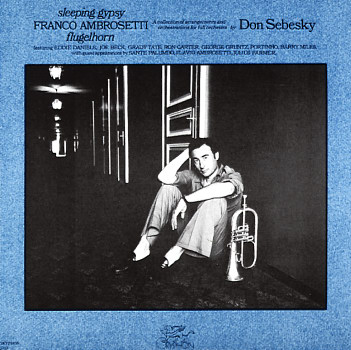 The trumpet of Franco Ambrosetti meets the orchestrations of Don Sebesky – and the result is a wonderful batch of tracks that take us back to some of Don's best work of the late 60s! Ambrosetti's got a beautifully evocative tone on his horn here – and he's supported by a cast that includes Eddie Daniels on flute and sax, Joe Beck on guitar, and George Gruntz on piano – all given plenty of space by Sebesky to express themselves within the larger group – making for work that's full and rich, yet also relatively personal and intimate too. Titles include the funky groover "Lugano Lady", plus "Johanna", "Sleeping Gypsy", and "Demoiselle".  © 1996-2021, Dusty Groove, Inc.

Solar Sessions
Jazz In Britain (UK), 1970. New Copy
CD...$14.99 20.99
The group's listed here as the Double Quintet of trumpeter Ian Carr, but the sound is right next to the best work of his Nucleus group for Vertigo Records – a groundbreaking blend of jazz and electric elements, served up in a style that's very different from American work of the time! At one ... CD