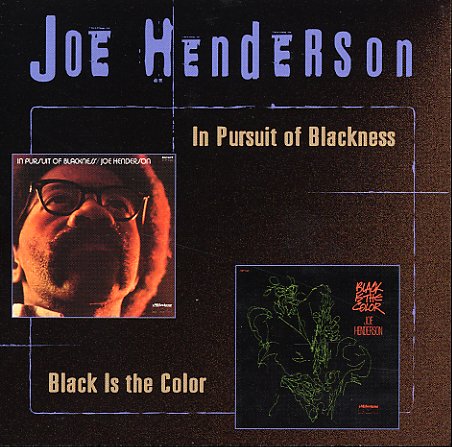 In Pursuit Of Blackness/Black Is The Color

2 electric soul jazz classics from Joe Henderson! In Pursuit Of Blackness features both live and studio material, all of which show Henderson at the height of his powers! George Cables is on electric piano throughout, and his backing of Joe Henderson is excellent – bringing out a whole new edge for the saxophone giant – one that's spacious, and searching, and much more open than before! The album features 2 tracks from the legendary 1970 Lighthouse concert with Woody Shaw on trumpet and Lenny White on drums – plus 3 more from a studio session that includes Curtis Fuller on trombone, Pete Yellen on saxes, and Stanley Clarke on bass. Titles include "Gazelle", "Mind Over Matter", "Invitation", and "A Shade Of Jade". Black Is The Color is some of the most ambitious electric work from Joe Henderson to date – a record that really has him stretching out from his previous small combo keyboard sets, into a space that's much fuller and even more righteous! Frequent partner George Cables is very much in force on electric piano – helping create that floating middle-level sound that really lets Henderson find some new space on tenor – as well as soprano sax and flute. Other players are a range of different musicians with a similar spirit – and include David Horowitz on synthesizer, Ralph MacDonald and Airto on percussion, Jack DeJohnette on drums and electric piano, Dave Holland on acoustic bass, Ron Carter on electric bass, and Georg Waldenius on guitar. Some of the cuts have a Brazilian tinge, others have a moody fusiony feel – really stretching out with intensity! Titles include "Black Is The Color Of My True Love's Mind", "Terra Firma", "Current Events", and "Vis-a-Vis".  © 1996-2021, Dusty Groove, Inc.