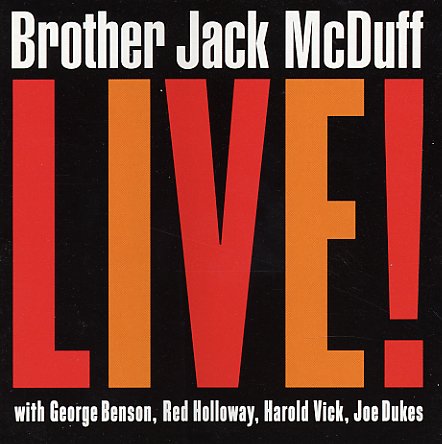 Live!/Live! At The Jazz Workshop

Slammin live work from the legendary Brother Jack McDuff – a player who was almost better on the bandstand than he was in the studio! First up is the album Live – a killer, and one of three live sides McDuff cut for Prestige during the 60s – a monster session of stretched-out jazzy grooves, with many fine little dancers, and a raw soulful feel throughout! The group's one of Jack's best – as Red Holloway's tenor blows and hollers over the fingerpoppin' grooves delivered by a young George Benson on his first major guitar gig – and the soulful drums of Joe Dukes scatter across the place, taking the whole band into some incredible rhythms! Titles include cookin' live versions of "Rock Candy", "Sanctified Samba", "Undecided", and "A Real Goodun'". Live At The Jazz Workshop features a group that's one of Jack's best ever – a lineup that includes the twin tenors of Red Holloway and Harold Vick, plus incredibly sharp guitar from a young George Benson, and some of the most unique soul jazz drum work you'll ever hear – courtesy of the amazing Joe Dukes. Despite their individual strengths, which might make this whole thing an ego-fest – all players fit perfectly into place on the album's hard wailing batch of groovers, and groove together with a sympathetic energy that's simply amazing! Titles include a great remake of "Jive Samba", plus "Dink's Blues", "Grease Monkey", "Passing Through", and "Vas Dis". This is the kind of thing live recording equipment was made for!  © 1996-2021, Dusty Groove, Inc.