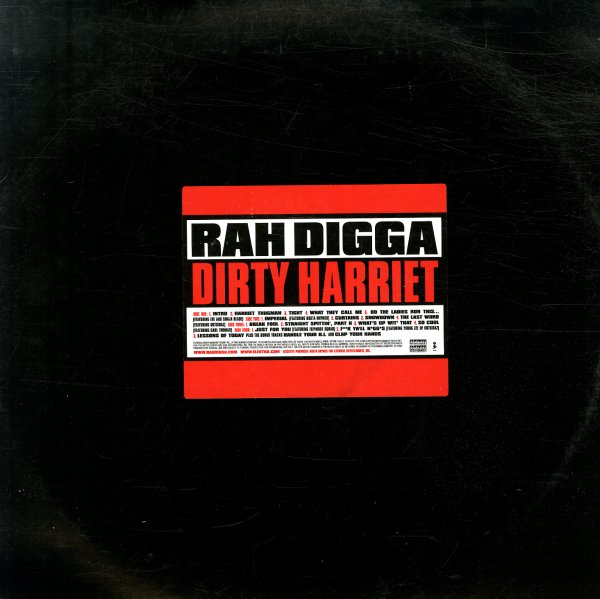 Guest spots by Busta Rhymes, Eve, Flipmode Squad and others, and beats by DJ Premier, Rockwilder, Pete Rock, the Nottz and others. Includes "Do The Ladies Run This. . .", "Tight", "Harriet Thugman", "What They Call Me", "Showdown", "Break Fool", "So Cool", "Just For You" and "Handle Your BI".  © 1996-2021, Dusty Groove, Inc.
(Edited promo in a stickered sleeve, slightly wavy from mositure with a peeled spot from sticker removal on back.)

Ahmad
Giant, 1994. Near Mint-
LP...$29.99
We never get tired of the mid 90s classic "Back In The Day", featured here in the original and remixed versions, plus "Touch The Ceiling", "The Jones", "We Want The Funk" and "Homeboys First". LP, Vinyl record album

Message
Sugar Hill, 1982. Good
LP...$4.99
The classic debut album by Grandmaster Flash & The Furious Five – one of the pioneering groups in hip hop -history- not that we didn't need to tell you that! With prototypical party jams and the original conscious rap landmark "The Message", all over old school grooves laid ... LP, Vinyl record album

Midnight Marauders
Jive, 1993. Very Good
LP...$24.99
A masterpiece from prime era Tribe Called Quest! Midnight Maurauders was Tribe's third LP, and even though there were no tracks yet credited to the Ummah, this is pretty much the beginning of Tribe's transition to that sound – with the same mellow, laid back vibe as their best early material ... LP, Vinyl record album

16 Bars
Lightyear, 2019. Sealed
LP...$14.99
An uncommonly soul-steeped hip hop soul soundtrack and musical companion piece to the documentary 16 Bars – spearheaded by Speech from Arrested Development, in which he visited and recorded with incarcerated singers and rappers finding hope in a prison rehabilitation program. The soundtrack ... LP, Vinyl record album

40 Acres N Sum Mula
Jakarta (Germany), 2019. Sealed
LP...$19.99
Juju Rogers cut a pretty unique path on his debut album, and this might be even stronger! He has a unique perspective to draw from – born and raised in Germany with an African American GI father and a German mother, his voice and perspective in contemporary hip hop is fresh and distinctive by ... LP, Vinyl record album

Compton
Interscope/Aftermath, 2015. Near Mint- 2LP Gatefold
LP...$29.99
Dr Dre's first proper album in 15+ years, and you just know he wouldn't even bother if didn't have something solid to put there, right? Sky high expectations aside, it's a damn strong effort. Dre is in ringmaster and super-producer mode here, bringing in a diverse roster of vocal players and doing ... LP, Vinyl record album