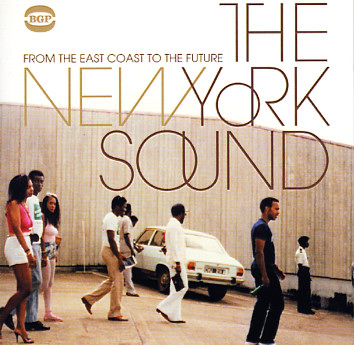 New York Sound – From The East Coast To The Future

Seminal club tracks from the New York underground at the end of the 70s – a host of killer singles from the Spring, Vanguard, and Posse labels – all in a fantastic blend of boogie, disco, electro, and soul! The work here is easily some of the most sophisticated to come out of the east coast club scene at the time – a real return to indie genius after disco broke heavily in the mainstream, almost a reinvention of the groove with a host of new elements! Some of these tunes will be familiar, but they're presented here in their full extended versions next to others that have been un-reissued for years – making the set an essential batch of tunes that really gets at the best sound of New York from these years! 10 long tracks in all – including "Over Like A Fat Rat" by Fonda Rae, "It Ain't No Big Thing" by Rainbow Brown, "Money (Dollar Bill Y'All)" by Jimmy Spicer, "Charley Says (Roller Boogie Baby)" by King Tim III, "Wired For Games" by C-Bank, "Rockin It" by MC Flex & The FBI Crew, "Electric Kingdom" by Twilight 22, "Is This The Future" by Fatback, "Love Hangover" by Players Association, and "You Keep On Making Me Hot" by Busta Jones.  © 1996-2022, Dusty Groove, Inc.