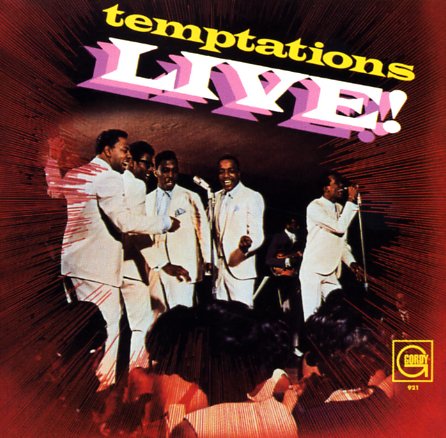 One of our favorite Motown live albums of the 60s – a really wonderful set from The Temptations, and one that explodes with even more energy than their studio sides of the time! The recording quality is great – in a way that really brings an edge to the music, and seems to sharpen the group's harmonies even more. There's still a Motown sound in the backings, but the live presentation shows just how much power the group had on their own without any heavier arrangements or production – and the crowd response indicates that the audience certainly feels the same way! Titles include "What Love Has Joined Together", "Beauty Is Only Skin Deep", "I Wish You Love", "Get Ready", "You'll Lose A Precious Love", "Don't Look Back", "Ain't Too Proud To Beg", and a medley that includes "I'll Be In Trouble".  © 1996-2023, Dusty Groove, Inc.
(Purple label stereo pressing with wedge logo and deep groove. Cover has some wear and aging, clear tape holding the top seam, and a name in pen on both sides. Labels have a name in pen.)