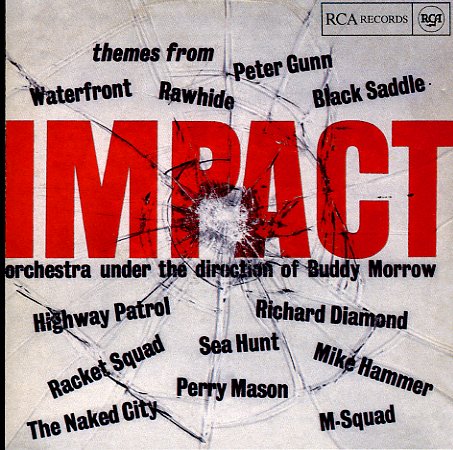 A pretty swinging batch of tracks that are very much in the same vein as Buddy Morrow's crime jazz LPs cut for RCA at the end of the 50s! The album features all TV themes from the time, most of them detective ones – like "Richard Diamond", "Perry Mason", "Naked City", "Sea Hunt", "Peter Gunn", and "Riff Blues" – plus a few others from westerns or other action shows. In all, the set's a very strong one in the style – with a blaring hard sound that must have been great to hear coming out of a tinny little speaker on an old black & white TV!  © 1996-2022, Dusty Groove, Inc.
(Living Stereo pressing with deep groove and 1s/1s stampers! Cover has light aging.)

Hugo In Wonder-Land
RCA/Nature Sounds, 1974. Sealed
LP...$11.99
The moog wizard Hugo Montenegro takes on the music of Stevie Wonder – in a blend that maybe makes the record one of the coolest that the studio maestro ever recorded! Hugo had already proven that he could groove in the 60s, and he picked up the moog at the end of the decade and started ... LP, Vinyl record album

Skin Tight
RCA, 1960. Very Good-
LP...$4.99
Pretty skin tight stuff – as Marty and crew play more bongos than you'd ever hear in a beatnik hoedown! The set's a very percussive one, and is one of Gold's better outings on RCA – thanks to the tightly stretched skins of the bongo. Gold arranged all tunes, and some of them are bongo- ... LP, Vinyl record album

Encore – More Of The Concert Sound Of Henry Mancini
RCA, 1967. Near Mint-
LP...$1.99
An unusual concert performance from Henry Mancini – one that features the maestro leading a full orchestra, but with a really groovy feel overall! Each track is relatively long, and based around a set of smaller songs wrapped up in a medley – almost mini-symphonies in pop music, ... LP, Vinyl record album

Strings Aflame
RCA, 1959. Near Mint-
LP...$14.99 19.99
A soaring set of fire from the legendary Juan Garcia Esquivel – a record with the promised strings in the title, but used in all the weird and wonderful ways that make Esquivel so great! Some of the strings are electric guitar lines, there's some great echoey piano, gongs and percussion, and ... LP, Vinyl record album

Viva Bossa Nova!
Capitol, 1962. Very Good+
LP...$9.99 (CD...$11.99)
A sweet little album from Laurindo Almeida and his "Bossa Nova All Stars" – not a group of Brazilian musicians, and instead a hip set of LA players who really help make the set sparkle! There's a bit more jazz here than on some of Laurindo's other Capitol records of the time – ... LP, Vinyl record album

Make It Easy On Yourself
A&M, 1969. Very Good+
LP...$2.99
Fantastic work by maestro Burt Bacharach – subtle genius, and an album that offers more to us every time we listen to it! Burt's work has been recorded by many – but few ever gave it the kind of treatment that he did – as you'll hear in this brilliant array of sweeping strings, ... LP, Vinyl record album