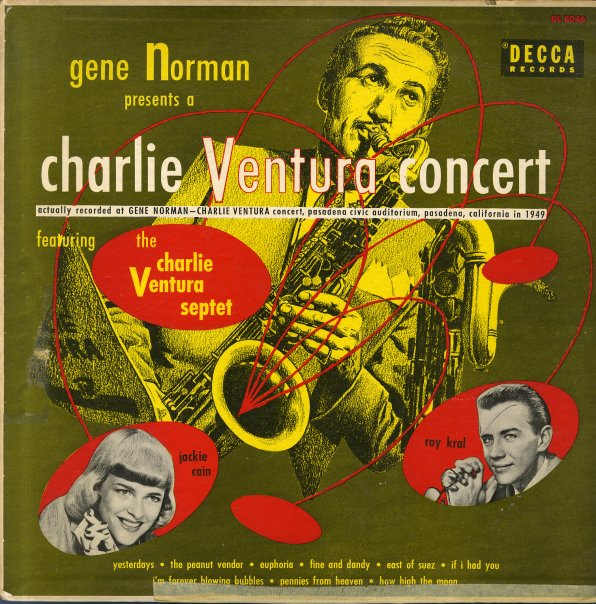 From bop to swing – and everything in between! The album's a classic performance by Charlie Ventura – recorded in Pasadena in 1949, with his septet that included Benny Green on trombone, Boots Mussuli on alto, and vocalese bits by Jackie & Roy! Ventura was a key link in two jazz traditions of the late 40s, and with help from Green and Mussuli, he really cuts things up on the set. Jackie & Roy sing on "East Of Suez", "Euphoria", and "I'm Forever Blowing Bubbles" – and other tunes include "If I Had You", "Fine & Dandy", and "How High The Moon".  © 1996-2023, Dusty Groove, Inc.
(Early 80s MCA pressing in a barcode cover.)

Charlie Ventura & His Band In Concert
GNP, 1949. Near Mint-
LP...$4.99 6.99
A perfect example of why the Charlie Ventura group was one of the most popular live acts on the west coast scene of it's day! Producer Gene Norman really manages to capture the charm of the group in all its glory – recorded live in a lineup that features Conte Candoli on trumpet, Bennie ... LP, Vinyl record album

Colors In Sound – Sal Salvador Quartet With Brass
Decca, Late 50s. Very Good+
LP...$16.99
A beautiful title for a beautiful session – one that unlocks the tones and hues in Sal Salvador's guitar work! Sal's working here with arranger George Roumanis, who brings some real Kenton-like touches to his backings for Salvador's guitar solos on the sessions – and like Stan, he ... LP, Vinyl record album

Boss Tres Bien (Decca pressing)
Decca, 1964. Very Good
LP...$11.99
A landmark blend of soul jazz and bossa nova – cut by the legendary Quartette Tres Bien back in the 60s! The group are kind of a "piano trio plus" – an outfit with piano, bass, and drums in the lead – but also plenty of conga and added percussion – a style used ... LP, Vinyl record album

Star Dust (aka Gene Norman Presents Just Jazz)
Decca, 1947. Near Mint-
LP...$1.99
One of the few albums to really get at the genius of the Lionel Hampton group at the height of their powers – their crowd-pleasing antics that were always a big draw for live audiences! This set catches Hamp and a great group at the Pasadena Civic Auditorium – playing on long tracks ... LP, Vinyl record album