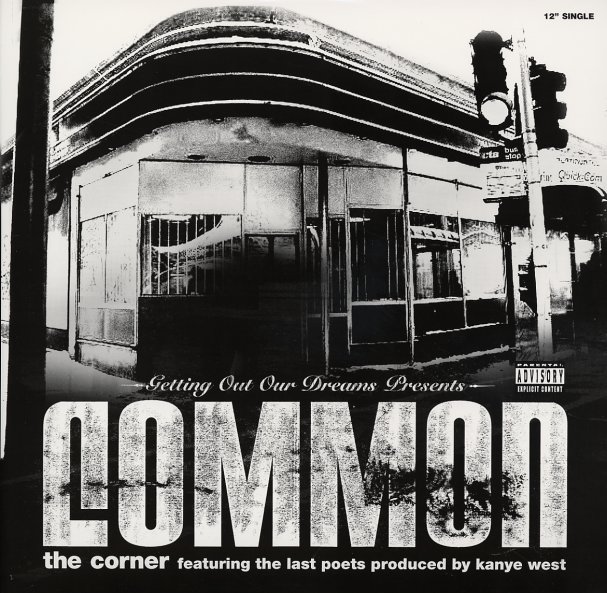 A welcome trip back to the basics! We had mixed feelings about the "next level" experiments that framed the Electric Circus LP – so this return-to-form cut really whets our appetite for some more of the grounded, bumping heart-and-soul of the city vibes Common made his name on! Kanye's production is at its most gritty here, and the Last Poets drop some righteous thematic wordplay into the middle. As a real bonus, the Last Poets reprise on the flip is a separate version of the tune with the complete Last Poets vocal. Nice!  © 1996-2021, Dusty Groove, Inc.
(Cover has bent corners and is bent along the opening.)

Corner (radio, inst, radio acapella, LP, LP acapella, Last Poet reprise)
Geffen, 2005. Very Good
12-inch...$4.99
A teaser from Common's '05 BE LP – a welcome trip back to the basics! We had mixed feelings about the "next level" experiments that framed the Electric Circus LP – so this return-to-form cut really whets our appetite for some more of the grounded, bumping heart-and-soul of ... 12-inch, Vinyl record

It's Ecstasy When You Lay Down Next To Me/I Never Thought I'd Fall In Love With You
20th Century, 1977. Near Mint-
12-inch...$14.99
A funky funky thumper from Barry White – and one of his last truly genius tracks! "Ecstasy" is presented here in a long long version that lets the tune's initial bass and drum interplay stretch out magnificently – sliding and slinking along in a classic White-styled groove, ... 12-inch, Vinyl record

I Want Your Love/(Funny) Bone
Atlantic, 1978. Near Mint-
12-inch...$9.99
Another huge hit of the C'est Chic album that gave us "Le Freak", with a similar uplifting piano groove and a chirping guitar line that kept us bouncing in the roller rink as kids. 12-inch, Vinyl record