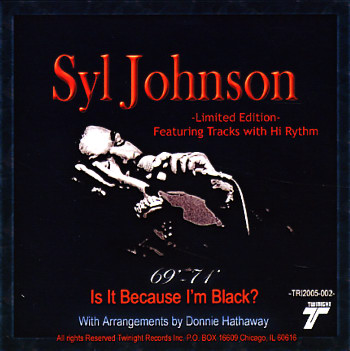 Is It Because I'm Black (limited edition)

An incredible new version of Syl Johnson's classic album Is It Because I'm Black – packaged here with a huge number of bonus cuts in a collection designed by Syl himself! The core album is one of the best ever soul albums to come out of Chicago – and it may well be one of the best soul albums to ever come out of the 60s! Syl Johnson mixes west side bluesy soul with some great Chicago soul arrangements by Jimmy Jones & The Pieces Of Peace – and the result is one of the heaviest soul albums you'll ever hear – hard-hitting and funky one minute, sweeter and more groovy the next – a wonderful portrait of the depth of Chicago soul at the time. Added to the original album are some tracks from later years – including a 2006 remake of "Is It Because I'm Black", some more conventional southern soul numbers from the early 70s, and Johnson's seminal 80s groover "Ms Fine Brown Frame". 20 tracks in all – with titles that include "Right On Sister", "Is It Because I'm Black", "Kiss By Kiss", "One Way Ticket", "Get Ready", "Black Balloons", "Walk A Mile In My Shoes", "Concrete Reservation", "Talk Bout Freedom", "New Day", "Your Love Is Good For Me", "That Is Why", "Together Forever", and "Tell The Truth".  © 1996-2021, Dusty Groove, Inc.