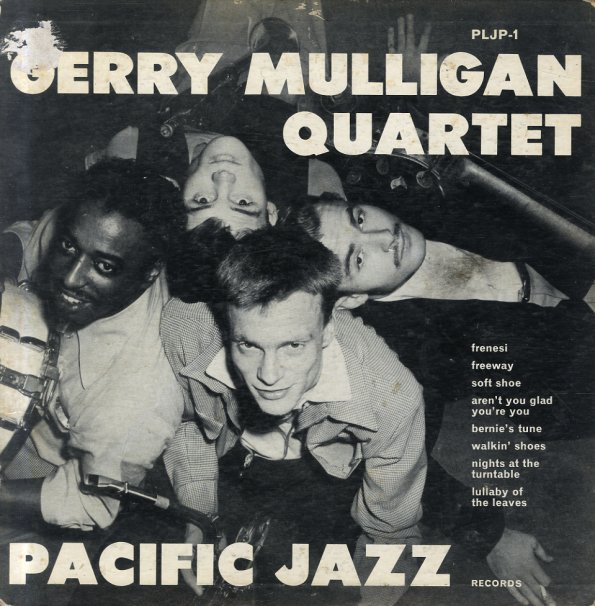 The first-ever album on Pacific Jazz – and a real doozy too! The record's something of a blueprint for west coast jazz of the 50s – and features Mulligan in a pianoless quartet with Chet Baker on trumpet, Chico Hamilton on drums, and Bob Whitlock on bass – running through tunes that have a fluidly grooving approach and a masterful sense of economy, one that's emphasized even more on the shortness of the 10" LP – a nice change from some of those overstuffed Mulligan CDs that sometimes get us a bit lost in the 20-plus tracklist! Titles include classics "Freeway", "Walkin Shoes", "Bernie's Tune", "Nights At The Turntable", and "Soft Shoe".  © 1996-2020, Dusty Groove, Inc.
(Black label pressing with deep groove. Cover has light surface wear and a vintage price sticker on back.)

Gerry Mulligan Quartet (Pacific Jazz – PJLP 2) (10 inch LP)
Pacific Jazz, 1953. Very Good-
LP...$9.99
Gerry's second 10" album for the Pacific Jazz label – and almost as groundbreaking as the first! Not only is the quartet with Chet Baker featured strongly on side 1 – with classics that include "Cherry", "Carson City Stage", and "Motel" – but ... LP, Vinyl record album