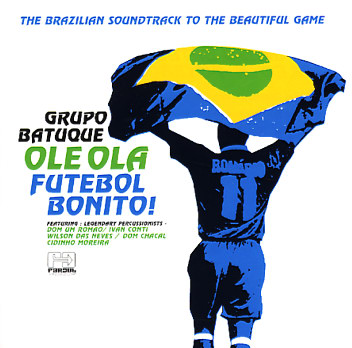 A Brazilian tribute to football – but one that's given a distinctly London twist – as core rhythms by Wilson Das Neves, Dom Um Romao, and others are mixed up and augmented by Da Lata, Zero dB, Roc Hunter, Fauna Flash, and Osunlade! The album's got a depth and compelling quality that goes far beyond other records by Grupo Batuque – as tightly-played percussion riffs are mixed with sound effects, crowd noise, and commentary from football games – all in a rich sonic tapestry that goes past simple samba or batucada! The whole thing's almost like an audio document to the greatness of the sport and its importance in Brazilian culture – but thanks to the globe-spanning efforts of Far Out, the added production help should help settle more than a few disputes at the World Cup! Titles include "Torcida Do Flamengo", "E Ruim (Zero dB rmx)", "Ole Ola", "Isto E Samb", "Na Cancao Do Samba", "Ole Ola (Fauna Flash rmx)", "Na Batida Do Agogo (Osunlade rmx)", and "Berimbal Capoeira (Da Lata rmx)".  © 1996-2022, Dusty Groove, Inc.

Vida E Obra De Johnny McCartney
CBS/Lion, 1971. New Copy
CD...$4.99 14.99
Post-Tropicalia work from Leno – a Brazilian singer who'd worked as part of a duo during the Jovem Guarda years, but who really sounds great here on his own! The style's a bit more straightforward rock than the Brazilian sound of a few years back – a bit fuzzy and compressed at times, ... CD

Beat Boys (with bonus track)
RCA/Lion, 1968. New Copy
CD...$7.99 14.99
A hip little set from The Beat Boys – an Argetine group working in late 60s Brazil, supposedly with a bit of an influence on the sound of Tropicalia! The sound here is a bit straighter than the work of Caetano Veloso or Os Mutantes – a bit in the Jovem Guarda sound of more mainstream ... CD