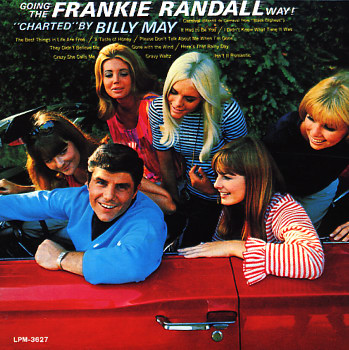 A lively little album from 60s singer Frankie Randall – a Sinatra-styled crooner plucked from the nightclub scene at Jilly's, but one who could also sing with the depth of Jack Jones or Vic Damone! This mid 60 RCA session has a nice sense of punch – thanks to arrangements from Billy May that swing heavily on the upbeat cuts, and let Frankie's confident vocals push to the front on a few of the mellower ones. Randall's got a bit of a speaking/then singing sort of style that must have been something to catch at Jilly's – and the mode works really nicely with the mix of older standards and 60s material used on the record. Titles include "Gravy Waltz", "Taste Of Honey", "Isn't It Romantic", "The Best Things In Life Are Free", "Here's That Rainy Day", "Carnival", and "They Didn't Believe Me". CD features the bonus track "Rosemarie".  © 1996-2022, Dusty Groove, Inc.
(Sealed 60s mono pressing!)