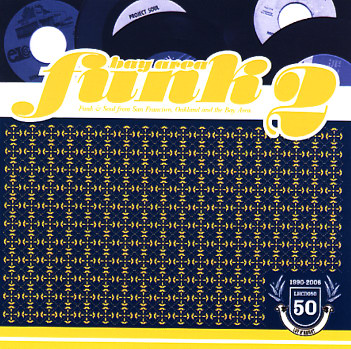 A way way deeper set than the first volume of Bay Area Funk – and a collection that shows that things got pretty heavy on the San Francisco and Oakland scenes of the 70s! A good number of the tracks here are instrumental, and show some wonderful interplay between the trippier sides of funky jazz and the harder sides of soul going on in the Bay Area back in the day – killer music from the fringes that often got lost in the shuffle of all the better-known music coming out on the bigger labels! The work here is all from very tiny labels – expertly selected and all officially cleared by the Luv N Haight team with keen respect for the artists involved – and in a way, the package has set a new high standard for the label! A tremendous discovery, and filled with tracks we'd never heard before – titles that include "Stop Look Listen" by Primevil, "Poor Sad Child (part 1)" by The Windjammers, "Born To Live With Heartache" by Mary Love, "Move In The Room" by Dawn & Sunset, "Ebony" by Project Soul, "Acid Lady" by San Francisco TKOs, "Hip Breakin" by Little Denise Stevenson, "Devil's On The Run" by Uptights Band, "Brute Strength" by Mile Selesia, and "Lenient With My Love" by The Relatives.  © 1996-2022, Dusty Groove, Inc.