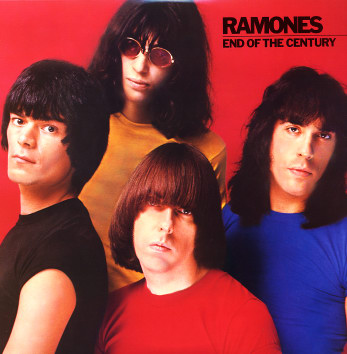 End Of The Century

The Roger Corman-Phil Spector year of the mighty Ramones! End Of The Century is a huge departure from the 1-2-3-4 burst and roar of the first 4 Ramones albums – a big ol' Phil Spector production – recorded concurrently with the filming of late 70s hottie PJ Soles dancing around in her underwear with a shy and shell-shocked Joey in Rock And Roll High School! Lord knows that End Of The Century was the end of the Ramones as we knew and loved them on LP (they remained great live until the very end), but it holds up very well and the big sound brings a smile. Plus it's got "Chinese Rock", worth the price alone. Other tracks include "Do You Remember Rock'N'Roll Radio?", "I'm Affected", "Danny Says", "The Return Of Jack & Judy", "Let's Go", "Baby, I Love You", "I Can't Make It On Time", "This Ain't Havana", "Rock N Roll High School", "All The Way" and "High Risk Insurance".  © 1996-2021, Dusty Groove, Inc.
(UK pressing with Strawberry stamp. Includes the printed inner sleeve. Cover has some light scrapes and surface wear.)