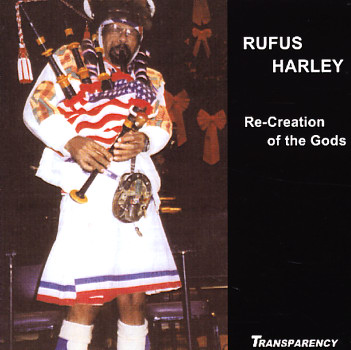 Re-Creation Of The Gods

One of the most legendary albums of jazz funk ever recorded! Rufus Harley was a saxophone player who also picked up the bagpipes for a few excellent 60s albums for Atlantic Records – and although those records are great, this 1972 independent album is a real mind blower! By the time of this set, Rufus had really stretched out – both creatively and spiritually – working his standard bagpipe jazz groove into a much trippier sound, one that explored the tonal and modal properties of the instrument. Not only that, Rufus got a lot funkier than ever before – working here with organist Bill Mason, a sonic contemporary of Leon Spencer and Charles Earland – and the resultant mix of organ and bagpipes creates a monstrous sound that's unlike anything we can describe! The album's a mixture of Sufi and Biblical statements – fused into long funky jazz tracks, stretching out into some incredible grooves. Includes the classic "Malika", plus the cuts "Etymology", "Hypothesis", and "Nobody Knows The Trouble I've Seen", done in a great heavy version! CD also features a bonus 10 minute jam not on the original album!  © 1996-2020, Dusty Groove, Inc.