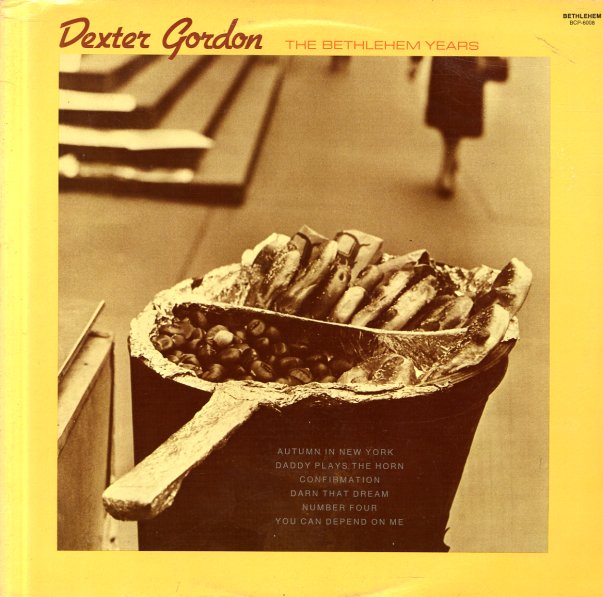 One of Dexter Gordon's proudest moments of the 50s – a rock-solid session for Bethlehem – easily one of the best-remembered hardbop sides from the label's California years! The album's got a relaxed, free-blown sound that's quite nice – with Dex in the lead on tenor, supported by the trio of Kenny Drew on piano, Leroy Vinnegar on bass, and Lawrence Marable on drums. Gordon's perhaps not as fully imaginative as he would become in the 60s, but his sound and control is still great throughout – and the rhythm section really helps knock this one out of the park. Titles include versions of "Darn That Dream", "Autumn In New York", "You Can Depend On Me", and "Confirmation", plus two originals "Number Four" and "Daddy Plays The Horn".  © 1996-2022, Dusty Groove, Inc.
(Mid 70s issue. Cover has faint ring wear.)

Blues Walk! – The Montmartre Collection Vol 1
Black Lion, 1967. Very Good+
LP...$9.99
Dexter Gordon at his European best – working at his very familiar haunt, the Cafe Montmartre in Copenhagen – a city that welcome Dexter Gordon with welcome arms in the 60s, as Dex left America to take care of himself and renew his energy overseas – expanding his sound and styles ... LP, Vinyl record album

After Hours
Steeplechase (Denmark), Mid 60s. Near Mint-
LP...$11.99
Lost genius from Dexter Gordon's initial years in Europe – a set that has him still stretching out in familiar Scandinavian modes, but with a slightly tighter sound too! The group's notable in that it features trumpeter Rolf Ericson – whose horn really adds a lot to the frontline, and ... LP, Vinyl record album

Long Tall Dexter – The Savoy Sessions
Savoy, Late 40s/1976. Very Good+ 2LP Gatefold
LP...$6.99
A huge collection of material that Dexter recorded for Savoy in the early bop years – mostly issued as 78 rpm singles, but also including a number of tracks from the album Dexter Rides Again. The set brings together a wealth of alternate takes of the material, including a number of unissued ... LP, Vinyl record album

Doin' Allright
Blue Note, Early 60s. Near Mint-
LP...$24.99 (CD...$4.99)
Doin Allright? Dexter's doing great on this one – working with that fully mature Blue Note sound of his – a rich approach to soloing that keeps the tracks cooking with excitement! The group on the set's an all-star lineup that includes Freddie Hubbard on trumpet, Horace Parlan on ... LP, Vinyl record album

Nights At The Keystone
Blue Note, 1978/1979. Near Mint- 2LP Gatefold
LP...$19.99
Late live recordings from the mighty Dexter Gordon – wonderful material recorded at the Keystone Korner in the late 70s, with an inventively-blown power to match Gordon's earlier live sets from the European scene! The format here is similar – with Dexter out front, laying down ... LP, Vinyl record album