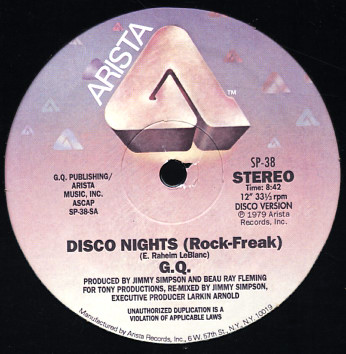 "Disco Nights" is one of the greatest grooves ever from GQ – a tightly-stepping number that's every thing a rollerskating track should have been at the end of the 70s! The tune builds wonderfully from the very first beat – keeping time with a very sharp focus, but also letting in plenty of jazzy keyboards and other riffing – as well as some extremely catchy vocals over the top!  © 1996-2021, Dusty Groove, Inc.
(In an Arista Disco sleeve, with a name in pen and light wear.)