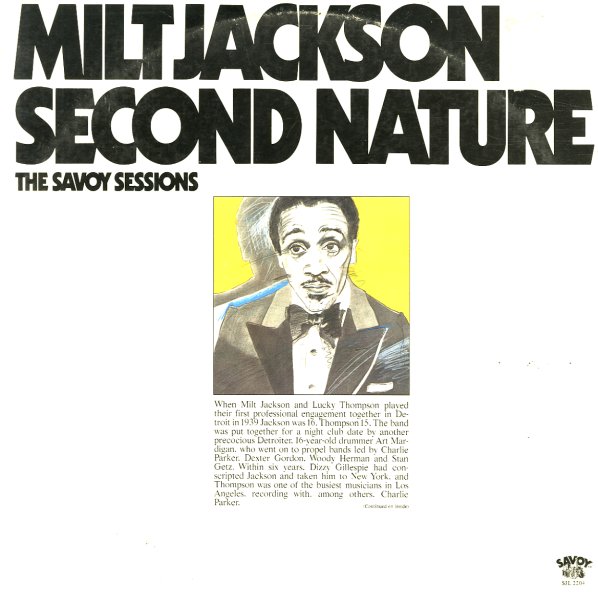 A great collection of Milt's excellent sides as a leader for Savoy, pulled together for a 70s release. Wonderful bop rendered here in a small agile group that features the vibist alongside the great Lucky Thompson on tenor, with Hank Jones, Wendell Marshall and Kenny Clarke in the rhythm section. These tracks were cut in the mid 50s, when Savoy was transitioning from the early bop 78's that were their stock in trade to making longer LP sessions giving the players a bit more room to stretch out. 16 numbers in all, including "Flamingo", "Can't Help Lovin' That Man", "Sometimes I'm Happy", "Ellington Medley" "Now's The Time", "Soul In 3/4", "Minor Conception", "Fred's Mood", "They Can't Take That Away From Me", "Angel Face" and "Soulful".  © 1996-2021, Dusty Groove, Inc.
(Shrinkwrap is lightly shopworn, with a small hole from sticker removal in front.)

No Count
Savoy, 1956. Very Good+
LP...$29.99
The title's an in joke that you'd get easily if you were a mainstream listener at the time – as the group here features members of Basie's mid 50s group, all playing in small combo formation without the Count! The lineup features two saxes – Foster and Wess – plus two trombones, ... LP, Vinyl record album

Trumpets All Out (Savoy)
Savoy, Mid 50s. Very Good
LP...$39.99
As you might guess from the title, the album's an all-trumpet affair, one that features 5 different players on the instrument – Art Farmer, Emmet Berry, Charlie Shavers, Ernie Royal, and Harold Baker – supported by spare rhythm from the trio of Don Abney on piano, Wendell Marshall on ... LP, Vinyl record album

Philosophy Of Urso
Savoy, Early 50s. Very Good+
LP...$33.99
One of the few albums ever issued as a leader by Phil Urso – a bright young tenor star in the 50s, known for his work with Chet Baker and Stan Getz! The album features Urso in 3 different settings – one with Getz alumni that include Bob Brookmeyer and Horace Silver, grooving hard on ... LP, Vinyl record album