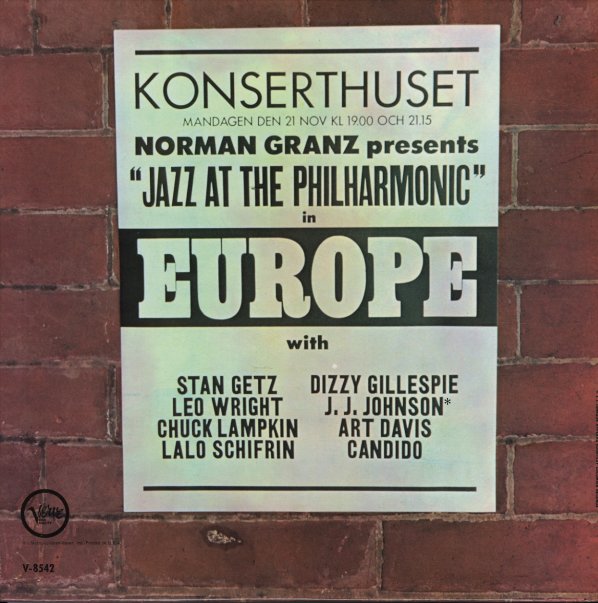 Jazz At The Philharmonic In Europe (brick cover)

A great little live set – ostensibly a Dizzy Gillespie performance, but with some very strong guest stars! The core of the group is Diz's great one from the early 60s – with Lalo Schifrin on piano and Leo Wright on alto and flute, and they're joined by Stan Getz, JJ Johnson, and Candido for this tasty set of three long tracks: "Kush", "Sweet Georgia Brown" and "Bop 'N' Boogie".  © 1996-2020, Dusty Groove, Inc.
(MGM pressing. Cover has an ink stamp and a bit of marker on back.)

Norm Granz' Jam Session #8
Clef, Early 50s. Very Good-
LP...$33.99
An early Norm Granz production, before they were issued under the JATP moniker, though basically the same idea. In fact, this set would later get repackaged as a JATP side. As you'd expect, it's an all star cast, with a group that includes Flip Phillips, Lester Young, Illinois Jacquet, Johnny ... LP, Vinyl record album

Jazz At The Philharmonic Volume 6
Verve, 1947. Very Good
LP...$3.99
Full LP issue of one of Norman Granz's most successful early JATP events, billed as the "new" number 6, and collecting sides previously issued as volumes 8, 9 and 10 on 10"s. The recording is of the 1947 Midnight Concert at Carnegie Hall, featuring players that include Howard McGhee ... LP, Vinyl record album