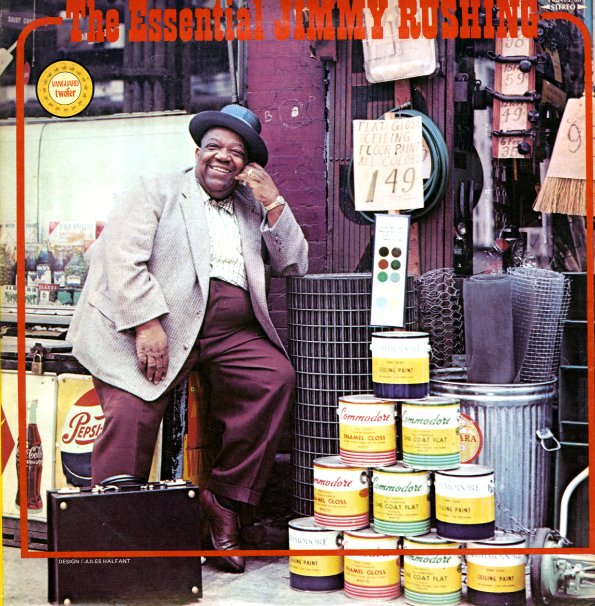 Vocalist Jimmy Rushing first came to fame working with Count Basie in the 30s, but it wasn't until the 50s that he really got the chance to step out on his own and cut a number of great sessions in the studio! This 2LP set features one of Jimmy's finest moments of the 50s – material recorded for Vanguard Records in 1954 and 1955, respectively, and featuring Rushing in the company of great small group trad players like Buddy Tate, Pat Jenkins, Emmett Berry, Lawrence Brown, and Freddie Green. The format is laidback and simple on both records – a style that clearly hearkens back to the Kansas City swing of the 30s, but which is delivered here with a more stripped-down approach that lets us focus even more on Rushing's earthy vocal presentation. Titles include the original tracks "Rock & Roll", "Sometimes I Think I Do", "Good Morning Blues", "Take Me Back Baby", "Sent For You Yesterday", and "Goin To Chicago" – plus versions of "How Long", "See See Rider", "Evenin", and "Everyday".  © 1996-2021, Dusty Groove, Inc.
(Mid 70s issue.)

Anyone For Mozart?
Philips, Mid 60s. Very Good+
LP...$4.99
After taking on the work of Bach, Ward Swingle and crew serve up a set of Mozart tunes – working with drummer Daniel Humair and bassist Guy Pedersen to turn them into jazzy numbers perfect for the group's vocalese harmony style! The tunes are lively and grooving – with that perfect ... LP, Vinyl record album

Introducing Paula Greer
Workshop Jazz, Early 60s. Near Mint-
LP...$79.99
The one and only album by vocalist Paula Greer – an excellent singer from the Chicago scene with a style that's somewhere between that of Nancy Wilson and Lorez Alexandria! Paula's still been working around the Windy City in recent years, but she cut this one way back in the early 60s for ... LP, Vinyl record album

Sinatra Basie – An Historic Musical First
Reprise, 1962. Very Good-
LP...$9.99
Sinatra-Basie is the inaugural effort from the 2 leaders and the stellar orchestra – and it's a great one. Sinatra is as charismatic and loose out front as he's ever been on record, and the Basie & his players swing brilliantly with arrangements by Neal Hefti. Titles include "Pennie ... LP, Vinyl record album