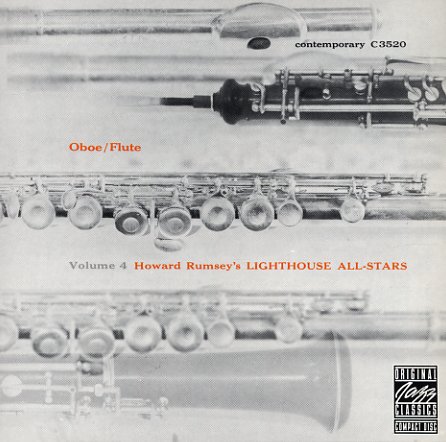 Sheesh, Howard Rumsey sure knew how to stick his name on a lot of records! (He must have been trying to give Norman Granz and Leonard Feather a run for their money!) Fortunately, most of them were also great – like this one, which features flute duets between Bob Cooper and either Bud Shank or Buddy Collette, over rhythms by Sonny Clark or Claude Williamson on piano, Max Roach or Stan Levy on drums, and Howard Rumsey on bass (actually making a rare appearance on wax here!) Titles include "Aquarium", "Still Life", "Bag's Groove", "Hermosa Summer", "Albatross", "Night In Tunisia", "Warm WInds", and "Happy Town".  © 1996-2021, Dusty Groove, Inc.
(Mono yellow & black label pressing with deep groove. Cover has light wear on back.)