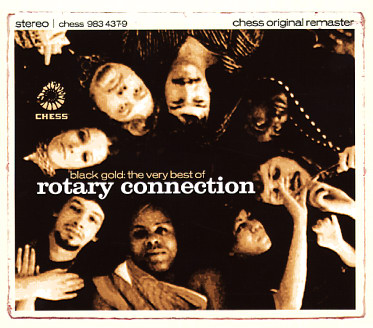 Black Gold Of The Sun – The Very Best Of Rotary Connection

Some of the trippiest soul music ever recorded – an amazing collection of work by the legendary Rotary Connection – early home to vocalist Minnie Riperton and arranger Charles Stepney! Rotary Connection was a unique late 60s combination of soul, jazz, and rock-based modes – all inflected by more baroque production styles coming down in the Chicago scene of the time – balanced perfectly by the genius of Stepney – who often drew inspiration from avant classical work to round out his sound! Stepney gave the group a heady heady sound that went far beyond the airy vocal sound of Minnie Riperton or the rougher edge of Sidney Barnes – and the mix of unusual instrumentation, odd recording techniques, and strange timings made the group's music years ahead of its time – at a level that's really only fully appreciated these many years later. This 2CD set goes way beyond previous collections of Rotary Connection work, because it shows a real appreciation for the more adventurous sounds of Stepney in the studio – and brings together the trippiest, most freewheeling cuts from the group's 4 albums for Chess/Cadet – as well as a number of key tunes that have been heavily sampled over the years. 33 tracks in all – including "The Salt Of The Earth", "Rapid Transit", "Magical World", "I Am The Black Gold Of The Sun", "A-Muse", "Sursum Mentes", "Memory Band", "Hey Love", "The Sea & She", "Song For Everyman", "Love Is", "We're Going Wrong", "Life Could", "Teach Me How To Fly", "VIP", "Let Them Talk", "Love Has Fallen On Me", "Respect", "Pink Noise", "Want You To Know", and "This Town".  © 1996-2021, Dusty Groove, Inc.